Traders and investors tend to have a notion that complexity is always better or rather, complex the strategies or products, higher the returns. This is a deeply ingrained bias that does more harm than good. This complexity bias exists maybe because we assume that the world is complex and hence it requires complex solutions and processes to deal with it. The same goes for markets as well, it may be the case that we think the markets are so vast and complex that we refuse to believe that simple products and strategies don’t work. Though we prefer complexity, our brains aren’t built for it.

On any given day, we make 1000s of decisions from simple ones like waling up, picking breakfast to complicated ones like deciding if today is indeed the day you will divorce your wife. As much as we like to assume that we carefully weigh the pros and cons of each decision and then rationally arrive at the choice that offers the maximum utility that is simply not the case.

Despite accounting for just 2% of your body weight, your brain consumes 20-25% of the energy. It is the single most hungry organ in your body. And as such evolutionarily, your brain has evolved to conserve energy. And how does it do that, by using shortcuts like defaults? If you think about all the times you have to make a decision about something, when you are tired, you most often than not pick the default option. Not just these, most of our biases like loss aversion, etc are a result of this tendency.

No doubt you would have heard this saying a 100 times. Though it has been bastardized to mean simplicity is always better than complexity, that’s not the case. There is some truth if you strip away the thick layer of nonsense piled on top of this.

I was reading this speech titled The dog and the frisbee by Andrew Haldane, the famed economist and Executive Director at the Bank of England. The first 7-8 pages are just so damn incredible and contain a lot of lessons especially for traders and investors.

At the beginning of the speech, he gives the example of a dog catching a frisbee.

Catching a frisbee is difficult. Doing so successfully requires the catcher to weigh a complex array of physical and atmospheric factors, among them wind speed and frisbee rotation. Were a physicist to write down frisbee-catching as an optimal control problem, they would need to understand and apply Newton’s Law of Gravity.

Yet despite this complexity, catching a frisbee is remarkably common. Casual empiricism reveals that it is not an activity only undertaken by those with a Doctorate in physics. It is a task that an average dog can master. Indeed some, such as border collies, are better at frisbee-catching than humans.

So what is the secret of the dog’s success? The answer, as in many other areas of complex decision-making, is simple. Or rather, it is to keep it simple. For studies have shown that the frisbee-catching dog follows the simplest of rules of thumb: run at a speed so that the angle of gaze to the frisbee remains roughly constant. Humans follow an identical rule of thumb.

He goes on to say:

The simplest explanation is that collecting and processing the information necessary for complex decision-making is costly, perhaps punitively so. Fully defining future states of the world, and probability-weighting them, is beyond anyone’s cognitive limits. Even in relatively simple games, such as chess, cognitive limits are quickly breached. Chess grandmasters are unable to evaluate fully more than 5 chess moves ahead. The largest supercomputers cannot fully compute much beyond 10 moves ahead (Gigerenzer (2007))

Most real-world decision-making is far more complex than chess – more moving pieces with larger numbers of opponents evaluated many more moves ahead. Simon coined the terms “bounded rationality” and “satisficing” to explain cost-induced deviations from rational decision-making (Simon (1956)). A generation on, these are the self-same justifications being used by behavioural economists today. For both, less may be more because more information comes at too high a price.

In econometrics, a model seeking to infer behaviour from the past, based on too short a sample, may lead to “over-fitting”. Noise is then mistaken as signal, blips parameterised as trends. A model which is “over-fitted” sways with the smallest statistical breeze. For that reason, it may yield rather fragile predictions about the future.

Yet, when it comes to out-of-sample prediction, these complex rules perform miserably. In fact, they are often inferior to simple alternatives. One such alternative would be the “recognition heuristic” – picking a winning team or player purely on the basis of name-recognition. This simple rule out-performs the ATP or FIFA rankings (Serwe and Frings (2006), Scheibehenne and Broder (2007)). One good reason beats many

I could literally copy-paste the entire 8 pages because it is so damn insightful and relatable. But it’s a point worth remembering always when making trading and investing. People who build trading systems typically tend to make things more complex when they figure something doesn’t work. They keep adding more parameters or indicators in a desire to eke our more performance. Ironically, this makes the system more fragile and from LTCM to 2008, we have incredible examples of things blowing up in the face of false belief and comfort in complexity and arrogance.

There’s a famous example of Harry Markowitz, the Nobel laureate and one of the fathers of modern finance. Harry Markowitz formulated the Modern portfolio theory (MPT) or mean-variance analysis which tells you how to construct an optimal portfolio that gives you the maximum returns for a given level of risk. MPT even today underpins much of the portfolio construction activity. Now given this you would assume that Markowitz would have some sophisticated portfolio constructed based on the risk-return trade-offs.

I should have computed the historical co-variances of the asset classes and drawn an efficient frontier. Instead, I visualized my grief if the stock market went way up and I wasn’t in it–or if it went way down and I was completely in it. My intention was to minimize my future regret. So I split my contributions 50/50 between bonds and equities.

Missing the trees for the forest

There is a final, related but distinct, rationale for simple over complex rules. Complex rules may cause people to manage to the rules, for fear of falling foul of them. They may induce people to act defensively, focussing on the small print at the expense of the bigger picture.

Another example in investing is that people spend inordinate amounts of money searching for hot fund managers, exotic strategies to generate extra returns. But the reality is that a simple dumb index fund or ETF outperforms 70-90% of all actively managed mutual funds, PMS, AIFs over 5-10 year horizons, and that too for 0.10% to 0.20%.

To give one more example investors and traders spend countless hours designing fancy systems to time the markets when the reality is that a simple moving dumb average gets most of the job done. Of course, there are trade-offs and it’s not a panacea but the point to keep things simple but no simpler. Meb Faber and Jeremy Siegel found that applying moving averages has outperformed by and hold strategies by a fair bit with far lesser volatility. But since it is so simple it we ignore it. But if some fancy salesman with a suit pitches you a blackbox quant strategy and says Artificial Intelligence and Machine Learning I’m sure we all will queue up give our money to him.

“Any intelligent fool can make things bigger, more complex, and more violent. It takes a touch of genius — and a lot of courage — to move in the opposite direction.” 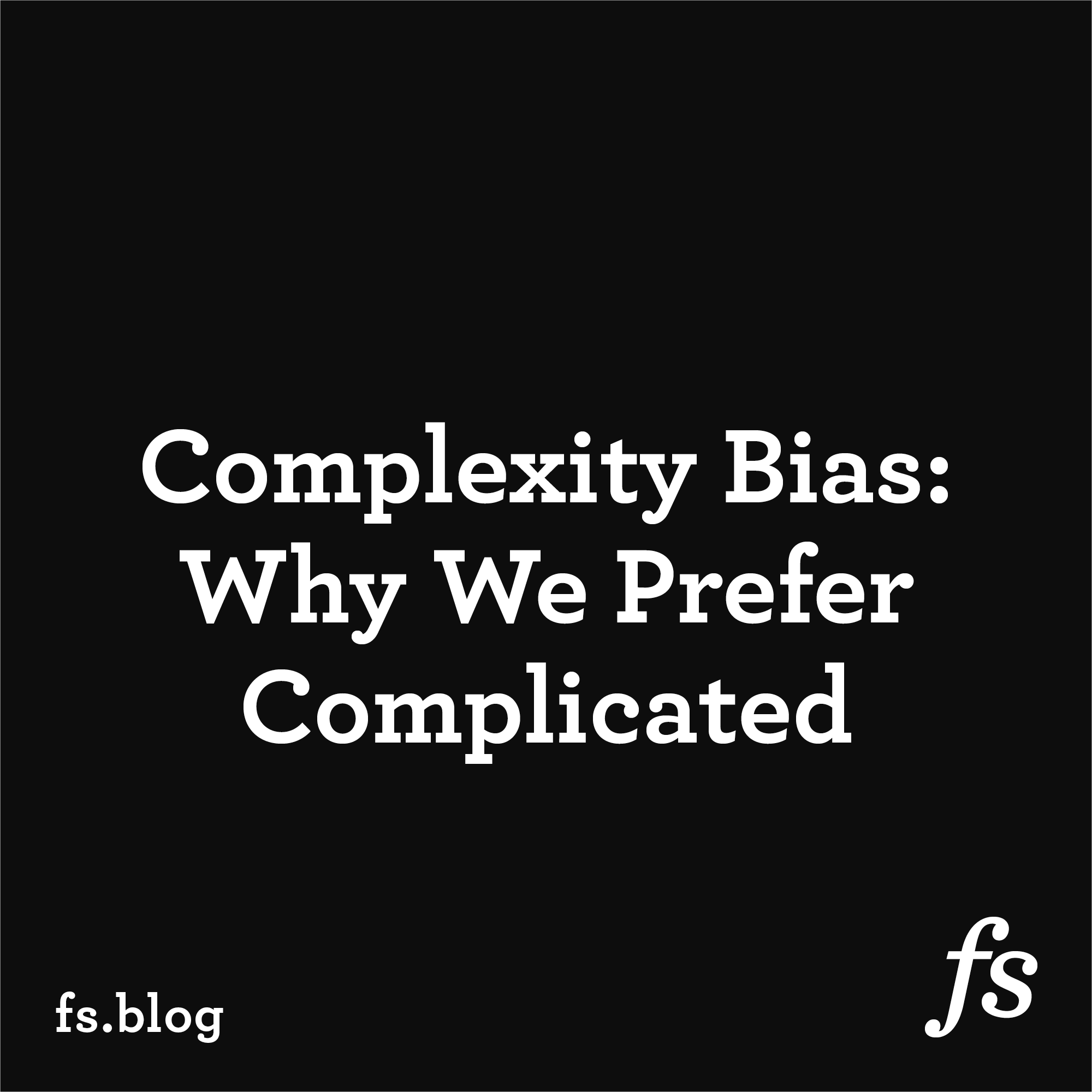 Complexity Bias: Why We Prefer Complicated to Simple

Complexity bias is a logical fallacy that leads us to give undue credence to complex concepts. Faced with two competing hypotheses, we are likely to choose the most complex one.

Complexity is seductive but as investors, we must be constantly vigilant not let ourselves trip over it because we often have real money on the line with real-life consequences. We can only appreciate simplicity once we have a fair understanding of all the complex nonsense out there in the world. This means a long discovery process while resisting the seductive allure to constantly tinker with your portfolio instead of letting it work for you.

A nice read. Thanks for sharing your thought!

A nice read. Thanks for sharing your thoug