Sensex and Nifty snapped a three-week winning streak and closed the week ended 10 June in red, with Sensex falling by 2.63% and Nifty by 2.31%.

On the sectoral front, Nifty Auto was the only sectoral index to end the week in green. The IT, Metal, Media, FMCG and Nifty Bank were the top draggers, each sliding over 2%. US markets saw a sharp sell-off on Friday following the latest inflation numbers. The inflation in the US hit a new 40-year high surging to 8.6%. For the week, US markets tanked between 4.58% - 5.6%. Here’s how the major indices around the world fared. The key event of the week will be the Fed interest rate decision. The FOMC (Federal Open Market Committee) will be holding its two-day meeting on the 14th and 15th of June. Along with this interest rate decisions of the Bank of England and Bank of Japan too are expected on 16th and 17th June.

Here are all the key macroeconomic events to watch out for:

Markets around the world were in free fall today as rising US inflation sparked fears of even more aggressive Fed policy tightening. 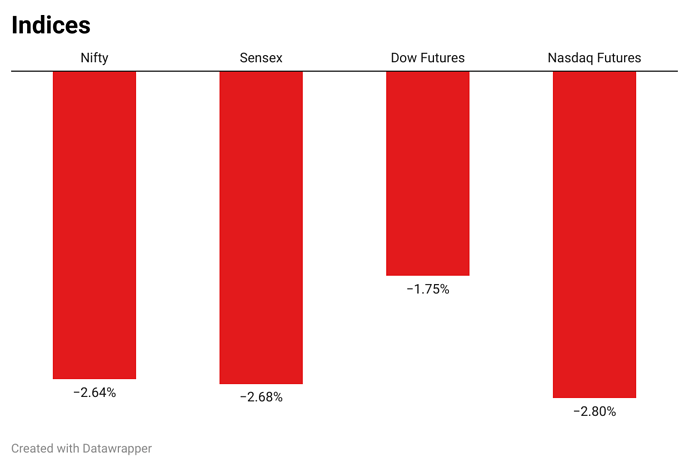 All sectoral indices were negative at the end of the day. Nifty IT index fell more than 4%, followed by Nifty Media, Metal, and PSU sectors, each dropping more than 3.5%. Honeywell Automation was the top gainer.

RBL Bank was the top loser. 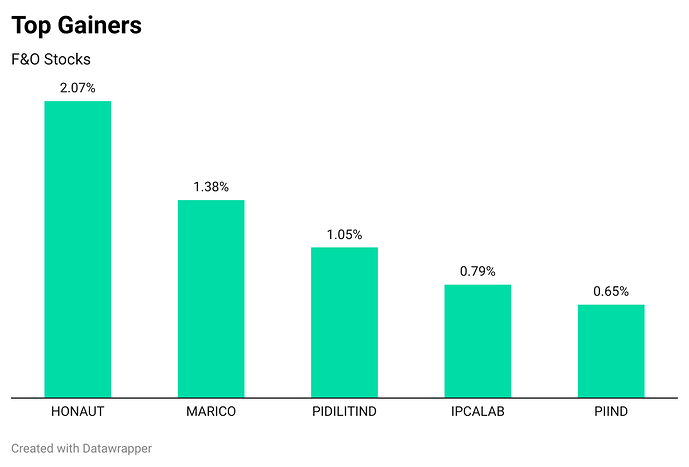 India’s retail inflation rate eased to 7.04% in May from April’s near-eight-year high of 7.79% thanks to a favorable base effect, according to data released on June 13 by the Ministry of Statistics and Programme Implementation.

The Rupee breached the 78 mark against the dollar for the first time tracking the global risk-off mood and the strength of the US dollar.

Shares of LIC slipped around 5.8% with the lock-in period for anchor investors ending today. The state-owned insurance behemoth’s share price is down more than 29% from its issue price of Rs. 949 per share.

Shares of Rajesh Exports surged around 4.9% today after on the news that the company has agreed to invest $3 billion in Telangana to set up the country’s first electronic-display plant.

US inflation accelerated to a fresh 40-year high in May, The consumer price index surged 8.6% from a year earlier. The widely followed inflation gauge rose 1% from a month earlier, topping all estimates. Shelter, food and gas were the largest contributors.

The value of the cryptocurrency market on Monday fell below $1 trillion for the first time since January 2021, according to data site CoinMarketCap, reaching as low as $926 billion.

The UK economy shrank in April at the sharpest pace in more than a year, raising the risk that the economy will contract in the second quarter.

Benchmark indexes declined for the third trading session following negative global cues and in anticipation of the outcome of the key Federal Reserve meeting. 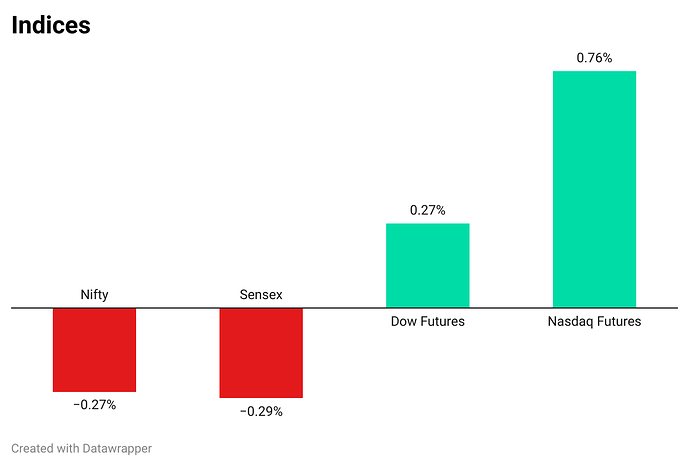 Majority of sectoral indices finished negative. Nifty Realty was the top performing sector, up 0.76%, while Nifty Bank and FMCG was the worst, down over 0.5% each. Adani Group was the top gainer.

Hindustan Petroleum was the top loser. 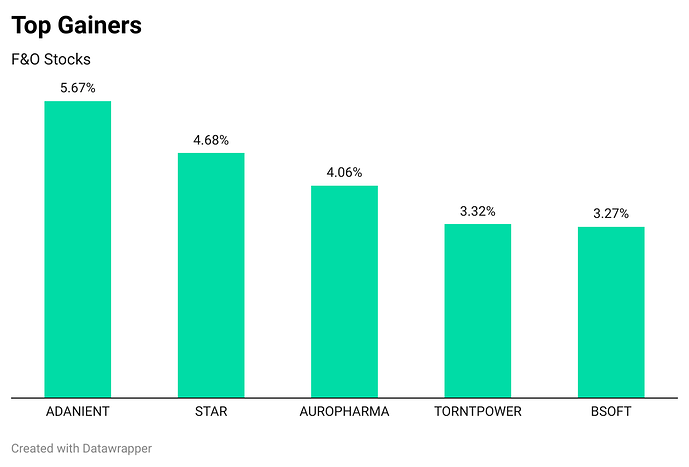 NCLT rejected Amazon’s plea that challenged CCI order striking down its 2019 deal with the Future group. The deal involves Rs. 14.31 bn investment by Amazon to buy 49% stake in Future Coupons.

The spending power of UK households fell more than it had in at least 21 years as wages grew were eaten up by the fastest inflation. After adjusted for prices, average earnings excluding bonuses were 3.4% lower than a year earlier, a huge drop since modern records began in 2001.

Inflation in Germany increased to 7.9% in May, the highest since the country’s reunification.

Nifty and Sensex extended their losing streak, closing lower after morning gains ahead of the US Federal Reserve’s interest rate decision later tonight. US stocks are set to open positive. 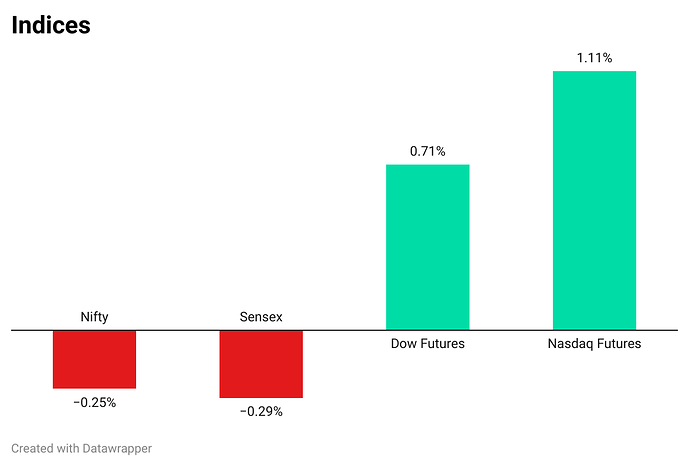 Strides Pharma was the top gainer.

Delta Corp. was the top loser. 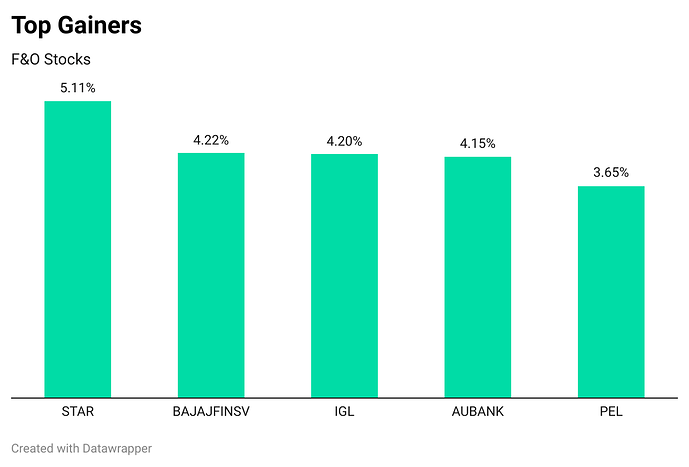 India’s merchandise exports in May increased by 20.55% to $38.94bn, while the trade deficit surged to a record $24.29bn, according to the government data released on Wednesday.

The auction of 5G airwaves is set to begin on July 26, the department of telecom notified in its notice of inviting applications. The cabinet, on Wednesday cleared the spectrum auctions, deciding the airwaves to be auctioned for a period of 20 years.

European markets rallied on Wednesday on news the European Central Bank would hold an emergency meeting on the recent bond market sell-off ahead of what is expected to be the most aggressive rise in U.S. interest rates since 1994. 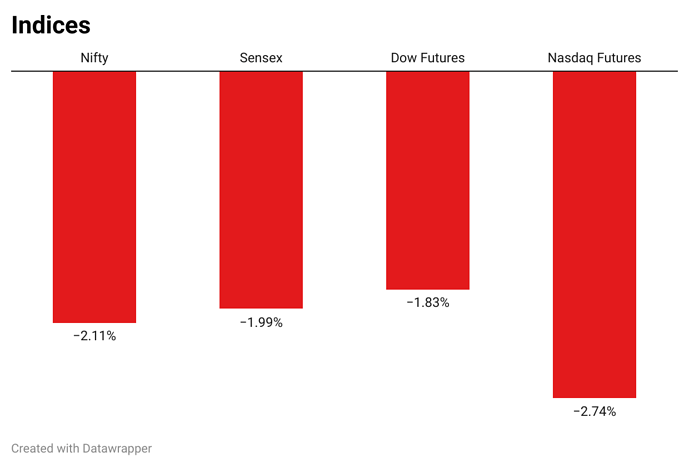 All sectoral indices ended the day in the red. Crompton was the top gainer.

Strides Pharma was the top loser. 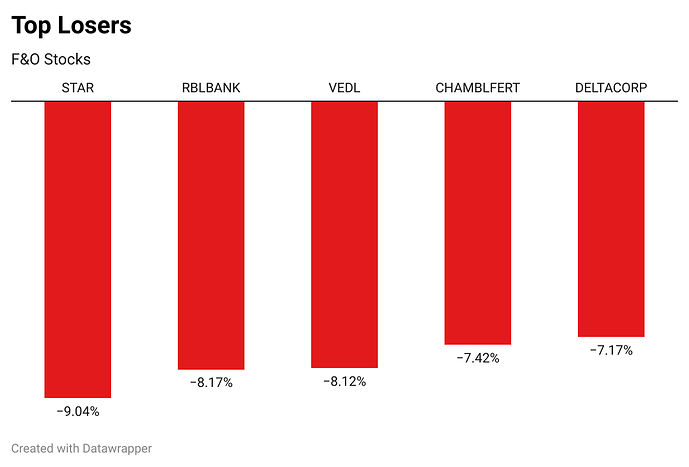 The retail businesses across India witnessed a growth of 24% in May this year against the pre-pandemic level of the same month in 2019, according to industry body RAI.

The US Federal Reserve announced a 75 bps hike in its target interest rate, The central bank while announcing the rate hike, said it is “strongly committed” to returning inflation to 2%. The 75 bps hike in the key lending rate is the biggest since 1994.

Switzerland’s franc soared on Thursday after the Swiss National Bank took markets by surprise with a large interest rate hike, putting the currency on track for its biggest one-day rise against the euro in more than seven years.

The Bank of England has raised interest rates to 1.25% which is a 13-year high to tackle soaring inflation despite growing fears over the strength of the economy.

Benchmark indices recovered from day’s lows but closed on a lower note, extending losses to sixth consecutive session. US futures are trading higher after yesterday’s sell-off. 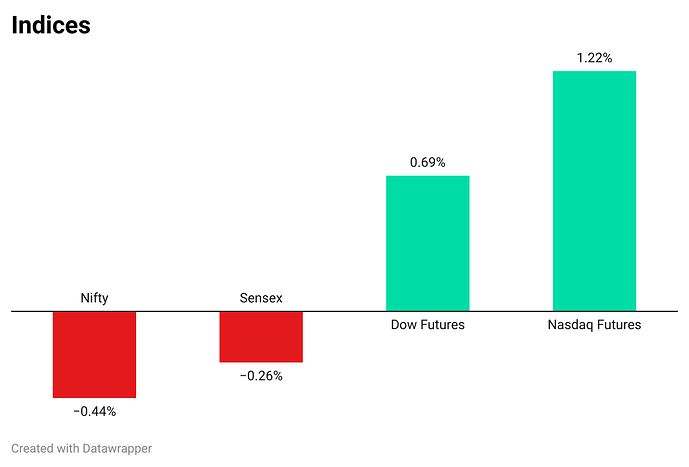 Except for minor gains in Nifty Bank, Media, and Metal indices, all other indices finished the day in the red. The worst performer was Nifty Pharma, down over 2%, followed by Nifty IT and Auto, both falling more than 1.1%. Delta Corp was the top gainer.

Titan was the top loser. 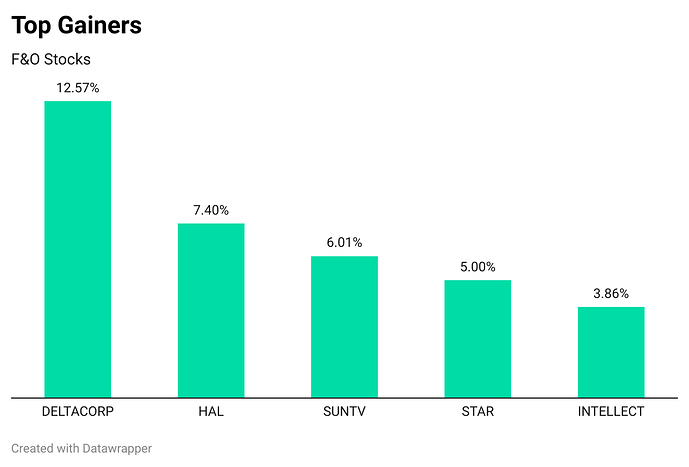 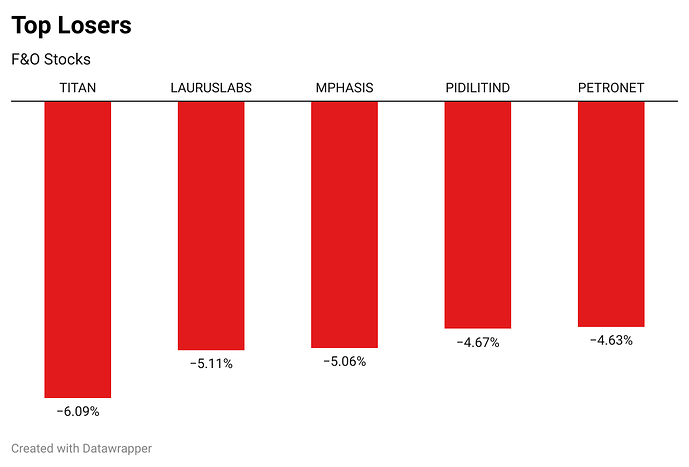 Reliance Industries is considering buying out Revlon Inc. in the United States, days after the cosmetics giant filed for bankruptcy according to reports.

India is likely to impose a ceiling on sugar exports for a second straight year starting this October, aiming to ensure enough domestic supplies and keep prices in check.

WTOs 164 members approved a series of trade agreements on Friday that included commitments on fish and pledges on health and food security after more than five days of negotiations.

Bank of Japan maintained ultra-low interest rates and its guidance to keep borrowing costs at present or lower levels. The BOJ maintained its -0.1% target for short-term rates and its pledge to guide the 10-year yield around 0% by a 8-1 vote.