A look at market performance in the week gone by;

Indian benchmark indices recovered from the early week lows to end the week marginally lower in what was another volatile week as market sentiment around the world remained subdued.

On the sectoral front, the Nifty Realty index was the top performer, surging over 3%, followed by Auto and FMCG each up by over 2% each. Nifty IT index was the top dragger for the second week running, sliding by over 3.3% for the week. Apart from minor gains in the German DAX index, all the major indices saw sharp declines in the week ended September 2. IPO of Tamilnad Mercantile Bank will be opening for subscription on Monday, 5th September and close on 7th September. Details

Key macroeconomic events to watch for;

While there’s no action on the macroeconomic front in India, there will be quite a bit overseas;

What are you looking forward to in the week? Share below and join the discussion

so far, our markets are showing resilience tracking US market fut (as US Markets are closing today)

Yeah, its amazing to see our market so resilent today. FII were short 80% and dollar index touched 110 still market is up and not showing weekness

unreal outperformance. one or two good days and we may actually breakout above 18k it seems like…looking at how strong we are

Yeah, its amazing to see our market so resilent today. FII were short 80% and dollar index touched 110 still market is up and not showing weekness

unreal outperformance. one or two good days and we may actually breakout above 18k it seems like…looking at how strong we are

What could be the reasons for the resilience, such up move? Rainfall, GST, GDP forecast?

Nifty and Sensex gained nearly 1% starting the week on a positive note, amid mixed trends in the global markets. 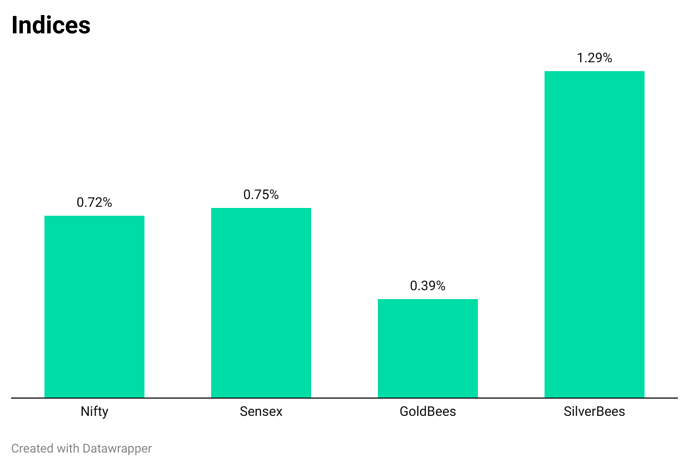 Exide Industries was the top gainer.

Escorts was the top loser. 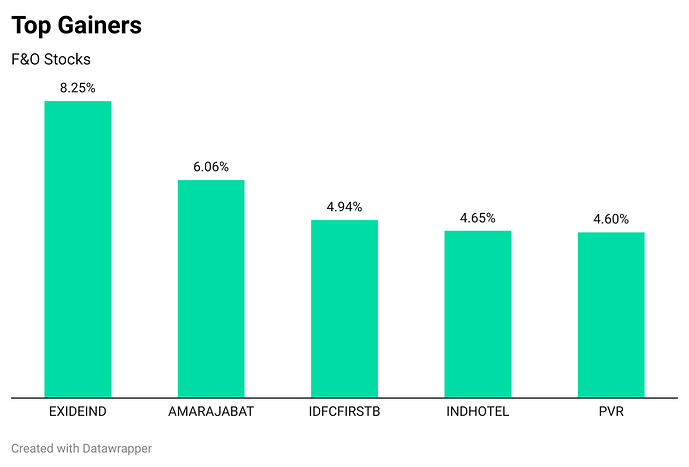 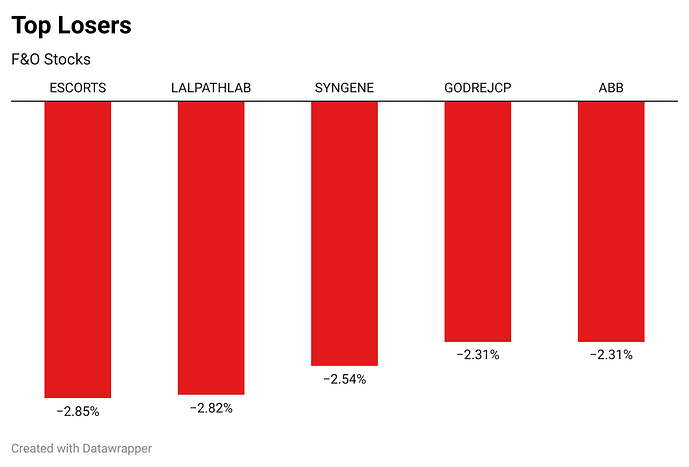 Services PMI activity rose from a four-month low of 55.5 in July to 57.2 in August, driven by strong growth in new orders and an increase in business activity. The sector experienced the highest increase in job creation in over 14 years.

Federal Bank surged more than 8% before closing at 3.35% after the private sector lender denied a media report suggesting it is in talks with Kotak Mahindra Bank for a merger.

Vodafone Idea climbed nearly 4% as the company prepaid a short-term loan of about Rs 2,700 crore to SBI to shore up lenders’ confidence as it urgently seeks fresh bank funds to tie up equipment supply deals for 5G networks and also clear some of its near Rs 15,000-crore trade payables.

China fell from second to fourth largest export destination as our exports fell 35% YOY to $6.8 billion during the April-August period, while total exports grew 17.1% due to a massive slowdown in Chinese economic activity.

Germany announces a support package of 64 billion dollars to help people cope with rising prices of energy and other goods and includes one-time payments to pensioners and students and also covers partial reductions in electricity bills.

As per the People’s Bank of China’s statement, the amount of foreign-exchange deposits banks needs to set aside is reduced from 8% to 6% from Sept. 15 as reserves, making it the second time this year to boost the yuan after the currency hit a two-year low.

Liz Truss is elected as the new Prime Minister of the United Kingdom, defeating Rishi Sunak. She has also been appointed leader of the ruling Conservative Party.

Benchmark indices failed to keep their gains and ended flat, following a mixed trend in global markets. Dow and Nasdaq futures indicate a positive start for US markets. 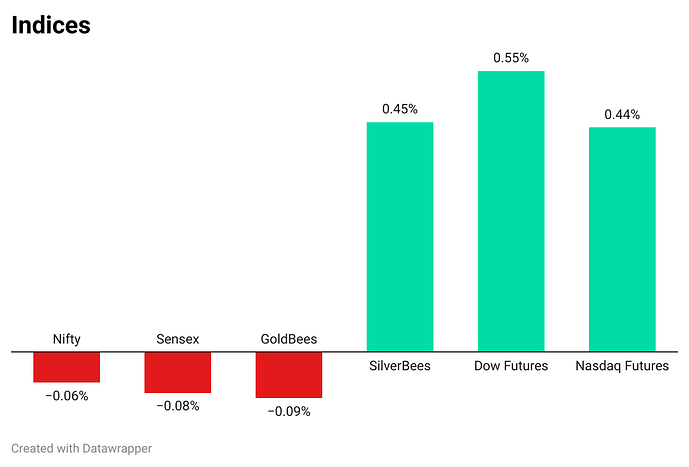 Apollo Tyres was the top gainer. 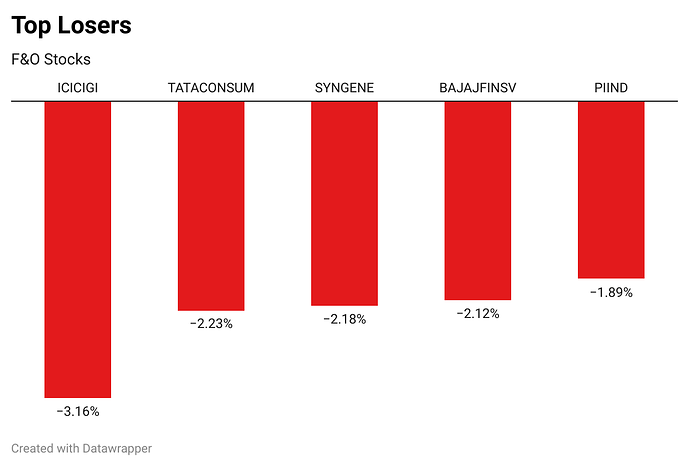 Reliance Industries has acquired a majority stake of 79.4% worth $32mn in US-based SenseHawk, an early-stage developer of software-based management tools for the solar energy generation industry.

DreamFolks Services had a dream listing as the company got listed at 56.04% premium over the issue price of Rs. 326 and closed up by 42%.

For the first time in 12 months, OPEC+ agreed to reduce production by 100,000 barrels a day from next month, taking supplies back to August levels, in a bid to stabilize the prices after a faltering economic backdrop triggered the longest price rout in two years.

The Malaysian ringgit tumbled to a 24-year low of 4.5015 per US Dollar and is at its weakest level since January 1998, during the Asian Financial Crisis on the backdrop of a stronger dollar and domestic political risks dampening sentiment 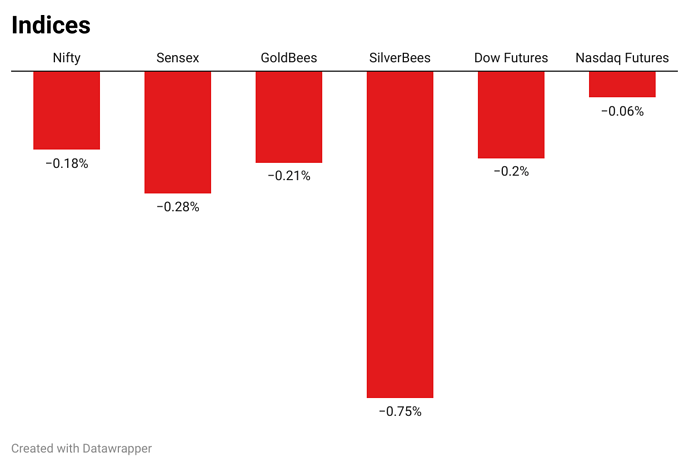 Shree Cement was the top gainer.

Interglobe Aviation was the top loser. 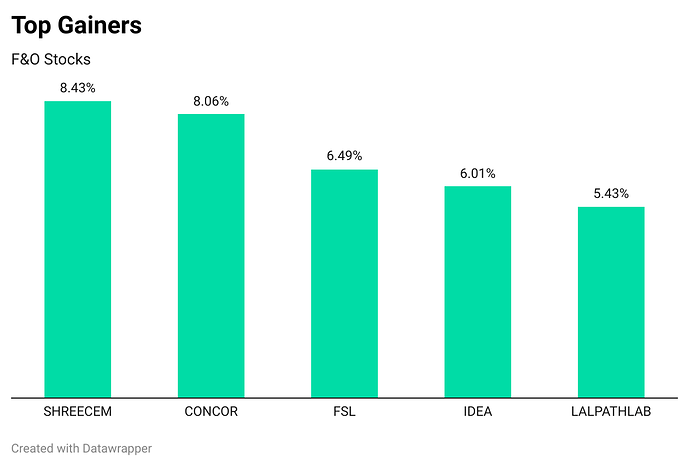 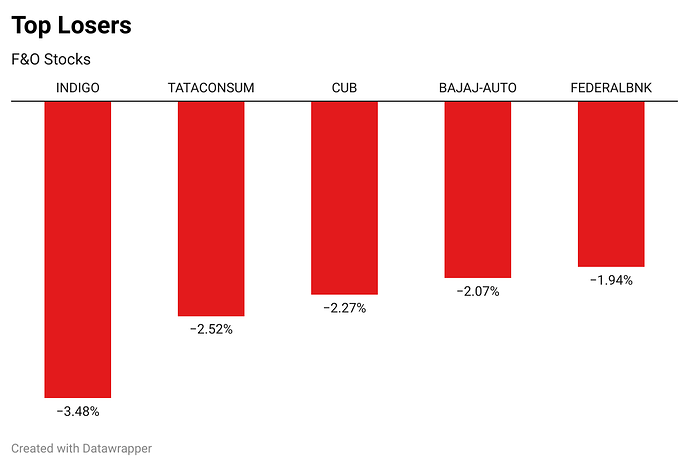 Coal India Ltd said it expects to meet its 306 million tonnes (MT) production target in the first half of fiscal year 23 if its mining sites are not severely impacted by heavy rains this month. Over 80% of domestic coal output is accounted for by the corporation.

ITC Ltd’s chairman Sanjiv Puri stated that the company would follow an “asset-right” strategy for its hotel division to ensure that the diverse conglomerate stays competitive and current while delivering superior performance.

TRAI has decided not to take any coercive steps against cable TV distributors, stating that there is enough competition in the industry and suggesting that the government take appropriate measures to promote cable infrastructure sharing with telecom service providers to enable broadband services.

Reliance Retail Ventures and Reliance Jio have raised about Rs 8,500 crore in working capital loans overall through short-term money market instruments. Both companies likely issued commercial papers with maturities of about 90 days and yields of 5.99% and 5.92%, respectively.

The government may consider privatizing public-sector fertilizer enterprises. Rashtriya Chemicals and Fertilizers, National Fertilizers, Fertilizers and Chemicals Travancore, Fertilizer Corporation of India, and other companies are all being examined for privatization. 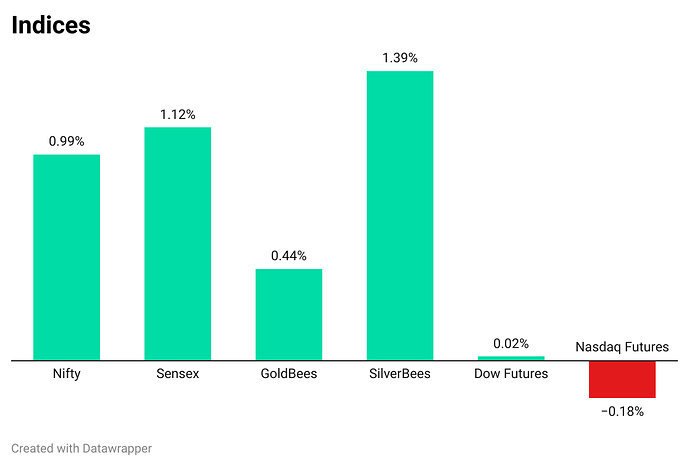 Metropolis Lab was the top gainer.

Hindalco was the top loser. 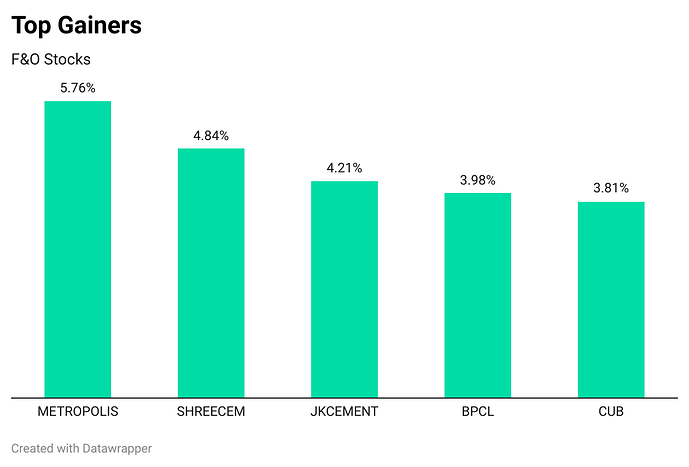 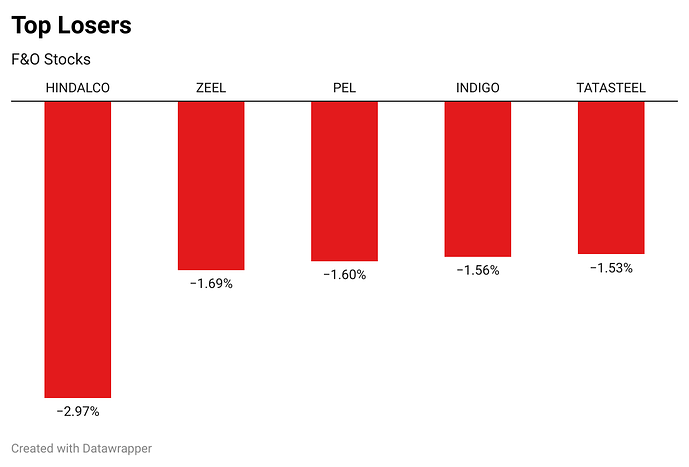 Rice prices have risen by more than 4% since Friday as Bangladesh reduced import duties from 25% to 15.25% in order to boost imports of the staple. Rice is exported to Bangladesh from West Bengal, Uttar Pradesh, Bihar, Madhya Pradesh, and Karnataka.

Automobile dealers’ body FADA reported that retail sales of automobiles rose 8.31% in India to 15,21,490 units in August of this year due to a rise in vehicle registrations across all major segments.

The government would acquire a stake in the debt-ridden Vodafone Idea whenever its stock price reaches Rs 10 or higher: Ministry of Finance

Oil prices fell 5% to close below $90 per barrel, falling below levels reached prior to Russia’s invasion of Ukraine, as downbeat Chinese trade stoked worries about recession risks.

UK Prime Minister Liz Truss announced a new energy price guarantee that would limit average household costs to £2,500 per year for the next two years.

Ukraine’s central bank maintained its main interest rate at 25%, stating that inflationary pressures remained high and that the major economic risk was an extended full-scale war with Russia.

Nifty and Sensex reversed from their highs and managed to settle marginally higher, with gains of close to 0.20%, despite strong global trends. US markets look set for a good opening. 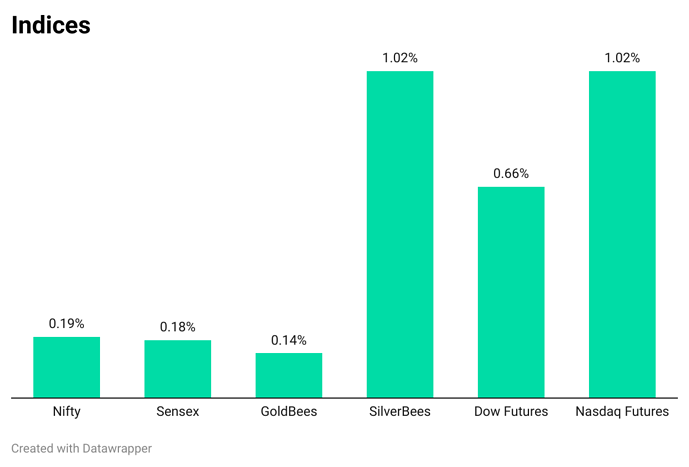 Rain Industries was the top loser. 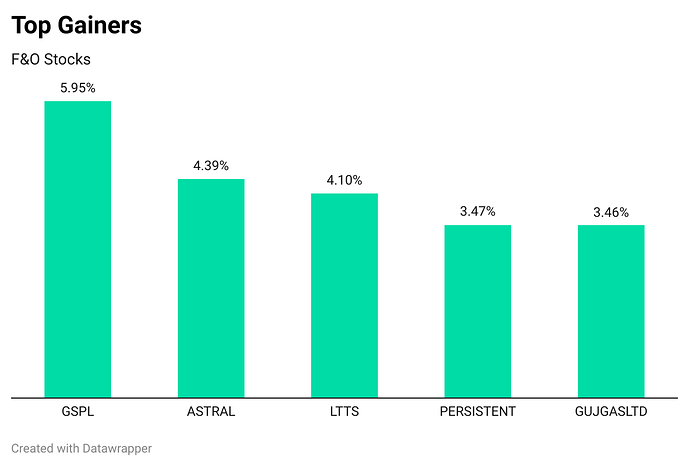 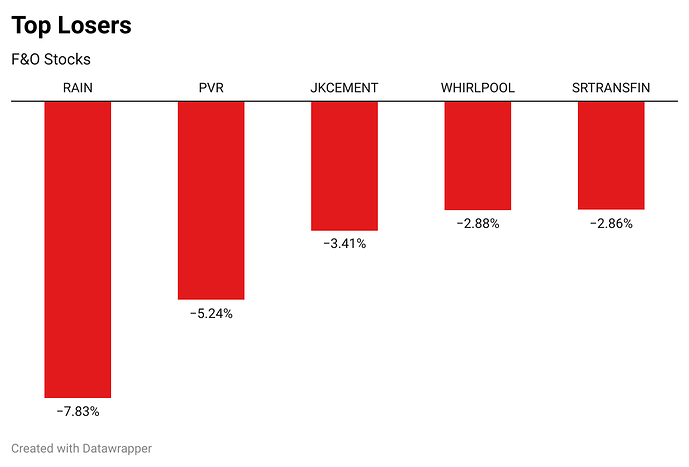 According to SIAM, passenger vehicle wholesale dispatches in India witnessed a 21% YoY growth at 2,81,210 units in August on the back of improved supplies of semiconductors and festive demand.

India has banned exports of broken rice and imposed a 20% duty on exports of non-Basmati rice except for parboiled rice to boost domestic supplies amid a fall in area under the paddy crop in the current Kharif season.

Denmark ended the world’s longest experiment with negative borrowing costs by raising its benchmark rate to 0.65% from minus 0.1% following a hike by the ECB.