Benchmark indices closed another week on the higher side, rising for the third straight week.

Coming to sectoral performance, Pharma and Bank were the only losing sectors for the week. Realty and IT were the top performers, surging over 4% each. On the global front, major markets in the US and Europe closed the week ended 3rd June in red. While the major Asian markets surged higher. All eyes in the coming week will be on the RBIs Monetary Policy Committee meet. The decision is expected on 8th June.

Besides RBI, European Central Bank too is set to meet next week, with decision expected on 9th June.

Benchmark indices recovered from early morning lows to close the day flat. Futures on Dow and Nasdaq are trading higher, indicating a positive start for US markets. 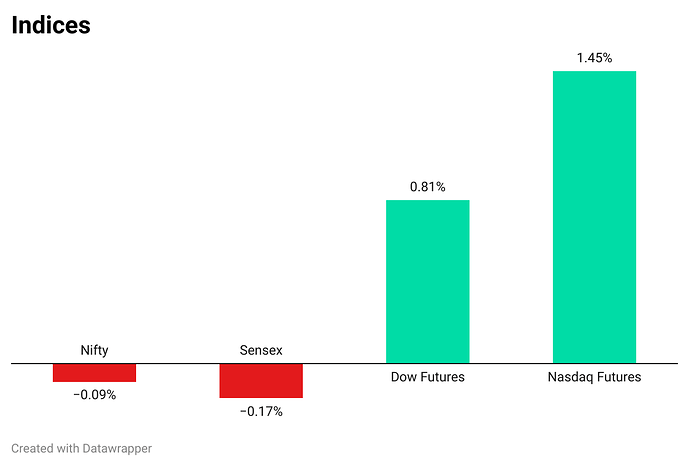 Majority of sectoral indices ended the day in the red. The best performing sector was Nifty Metal, gaining 1.12%. Nifty Media was the worst performer, down 1.25%. Rain Industries was the top gainer. 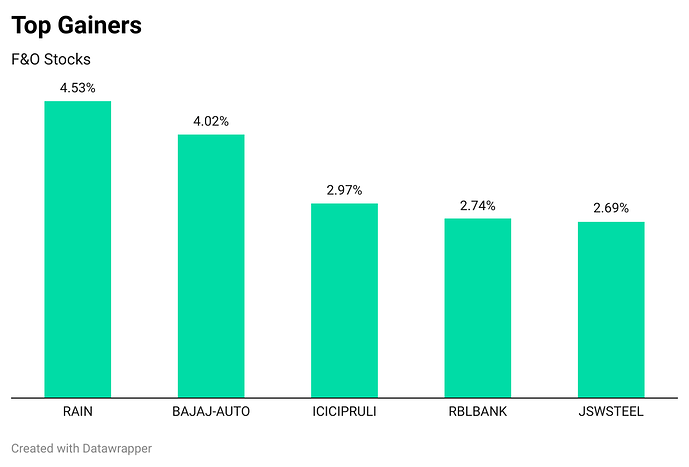 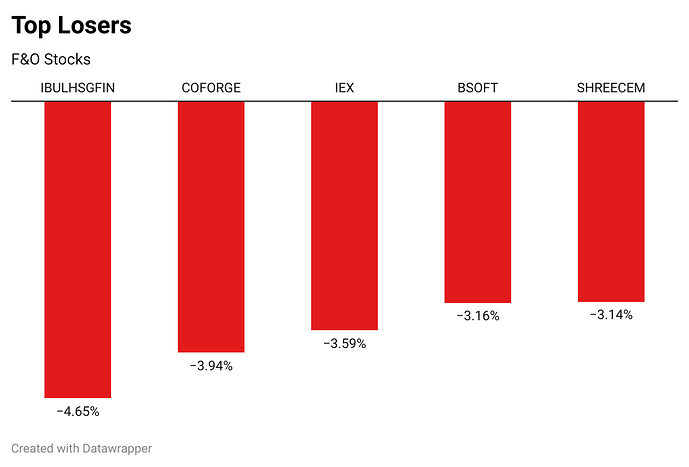 Tata Motors on Monday said it has bagged an order for supply of 10,000 XPRES-T EV units from BluSmart Electric Mobility. The deployment of 10,000 units makes this the biggest ever EV fleet order in India, the auto major said in a statement.

India’s palm oil exports in May were the highest in seven months, up 15% from April, as the country overcame curbs on Indonesian exports by sourcing more of the commodity from Malaysia, Thailand and Papua New Guinea.

ACME Group, a renewable energy company, will invest $6.70 billion in Karnataka over the next five years to build a green hydrogen and ammonia plant. The investment comes as India aims to produce 5 million tonnes of green annually by 2030.

Passenger vehicle retail sales rose last month, but two-wheeler and commercial vehicle sales remained low compared to the pre-COVID month of May 2019. As per FADA, overall auto retails were 16,46,773 units in May, down from 18,22,900 units in May 2019.

British Prime Minister Boris Johnson will face a confidence vote by lawmakers in the governing Conservative Party later on Monday.

Thailand’s retail inflation at 7.1% in May to its highest in nearly 14 years, a level that may test the central bank’s resolve to stand pat on borrowing costs.

Benchmark indices extended their losses for the third successive trading session, falling around 1%. US markets too look set for a weak opening. 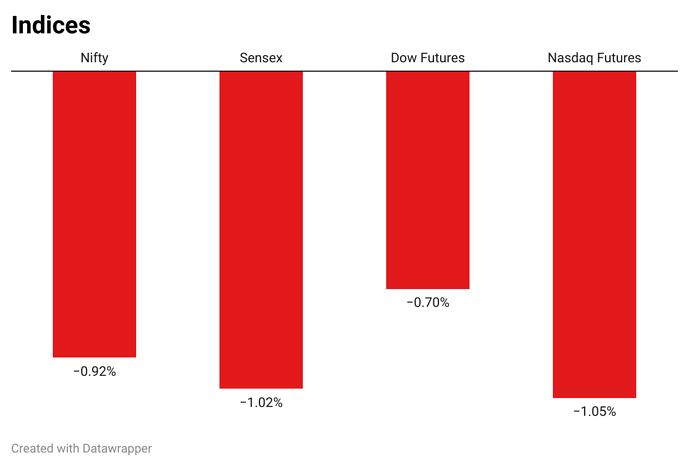 Except for the Nifty Energy and Auto indexes, all other indices ended the day in the red. Nifty Realty, Media, IT and FMCG were top draggers, falling over 1.5% each. ONGC was the top gainer.

Zee Entertainment was the top loser. 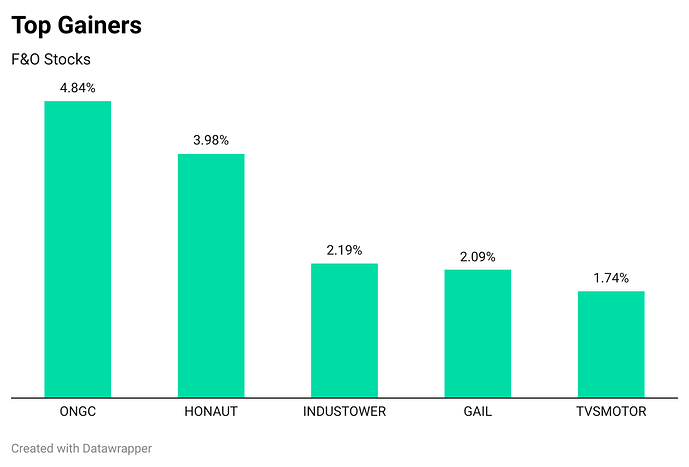 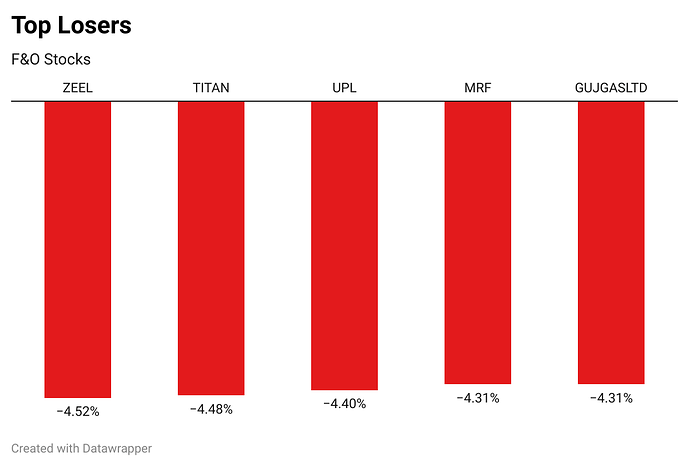 HDFC Bank today announced a 0.35% hike in lending rate. The hike, which comes a day ahead of the RBI’s scheduled policy review, is the second such move from the lender in as many months, taking the cumulative hike to up to 0.60%.

Shares of PB Fintech, which operates online insurance broker Policybazaar and loan marketplace Paisabazaar, plunged 12% after Yashish Dahiya, chairman executive and CEO of the company revealed his plan to sell up to 3.77 million equity shares through open market.

Essar Oil and Gas Exploration and Production Ltd. said coal seam gas output from its Raniganj East block in West Bengal has crossed 0.8 million standard cubic meters per day and is on track to triple the production in 24-30 months.

South Africa’s economic growth quickened in the first quarter as the country emerged from a fourth wave of coronavirus infections. GDP expanded 1.9% in the three months through March, compared with revised growth of 1.4% in the previous quarter.

The Japanese Yen dropped to a twenty-year low against the dollar, weighed down by the widening gap between yields in Japan and the US, stoking speculation over potential intervention. The currency fell as much as 0.8% to 132.96 per dollar – the lowest since April 2002.

Nifty and Sensex extended losses for the fourth session running after RBI hiked the repo rate by 50 basis points. US futures indicate a muted start for US stocks. 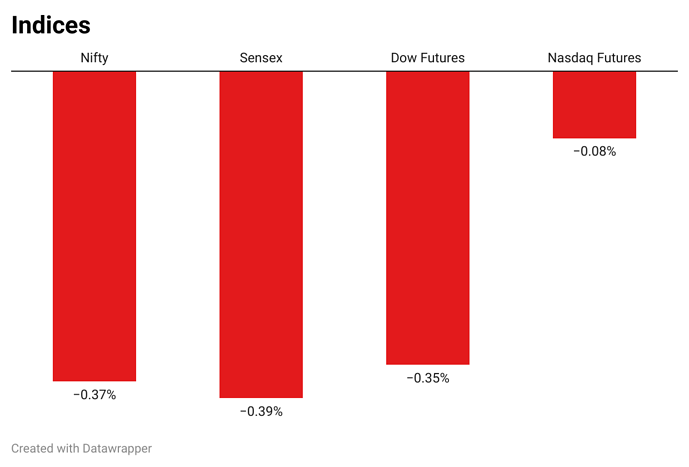 On the sectoral front, Nifty Realty index was the top performer, rising 1.89% followed by Nifty Media gaining 1.49%. Nifty FMCG was the top loser, falling more than 1%. Glenmark Pharmaceuticals was the top gainer.

Gujarat Gas was the top loser. 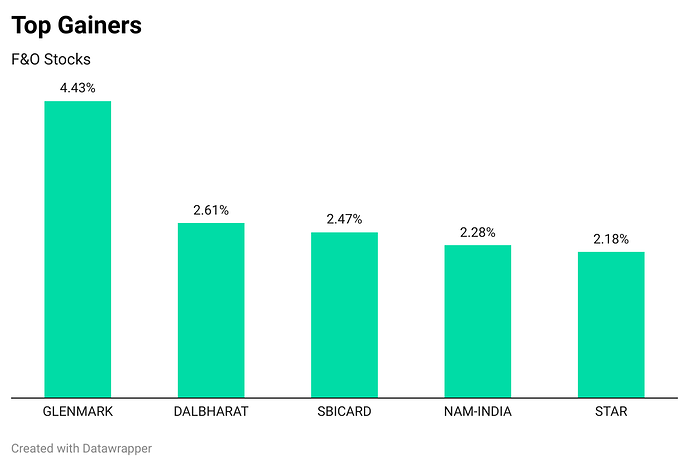 RBIs Monetary Policy Committee unanimously decided to hike the repo rate by 50 bps to 4.9% as inflation is likely to be above 6% till Dec 2022 given global growth risks and geopolitical tensions.

Yes Bank on June 8 announced that its Board of Directors, appointed under the YES Bank Reconstruction Scheme of March 2020, has recommended the formation of a new board, in line with the directions of the Scheme, to shareholders.

Eurozone output rose 0.6% from the previous three months in Q1, exceeding earlier estimate of a 0.3% advance released last month. But consumption fell 0.7% amid lingering lockdowns, even as employment increased 0.6%.

RBI on Wednesday allowed credit cards to be linked with the UPI, which will enable more people to make payments using the popular platform.

When markets keep on ignoring bad news (Crude at 123-124, USDINR at 77.8 , Rate hikes, high inflation) and keeps going up like it did today…It generally means that either the worst is in the price or some good news is around the corner.

Benchmark indices recovered from the day’s lows and gained nearly 0.8%, snapping a four-day losing streak. US futures indicate a good start for US markets. 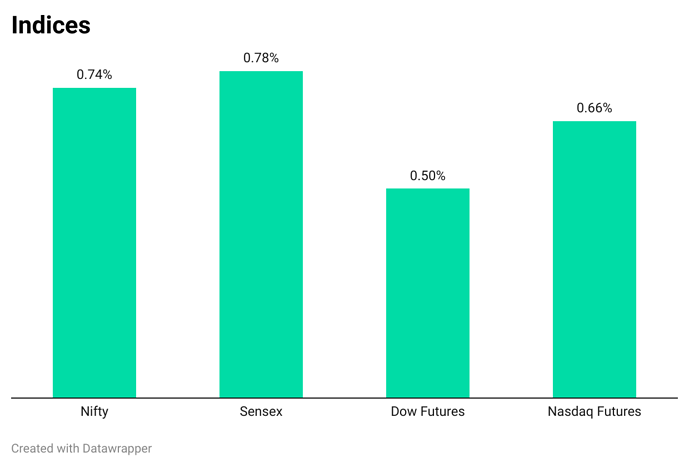 Except for Nifty PSU and Metal indexes, all other indices ended the day in the green. Nifty Pharma and Energy were the top performers, each gaining 1.2%, followed by Nifty IT, rising nearly 1%. 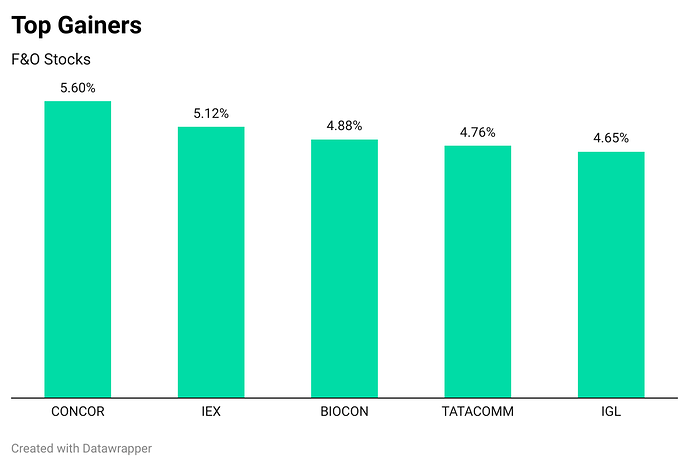 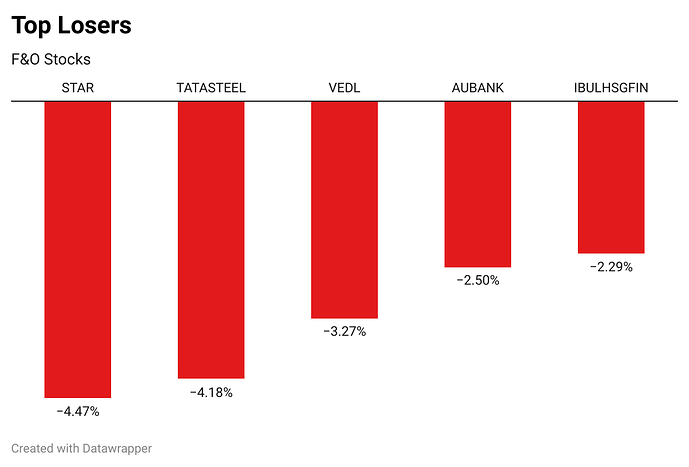 Welspun Corp Ltd (WCL) has partnered with Tata Steel to develop the “framework for and subsequently manufacturing” pipes for transportation of pure hydrogen and natural gas-blended hydrogen.

In a first ever, Coal India Limited (CIL) on Wednesday floated an international competitive bidding e-tender, seeking bids for import of 2.416 million tonnes (MTs) of coal.

The revised microfinance guidelines, which put all micro lenders on the same platform, slowed loan disbursement in the first 2 months of implementation as loan rejection rate jumped over 50% from the normal 35% because lenders now have to follow processes more diligently.

Freeport LNG, operator of one of the largest U.S. export plants producing liquefied natural gas (LNG), will shut for at least three weeks following an explosion at its Texas Gulf Coast facility, raising the risk of shortages especially in Europe.

Shanghai and Beijing went back on fresh COVID-19 alerts on Thursday after parts of China’s largest economic hub started imposing new lockdown restrictions while the most populous district in the Chinese capital shut entertainment venues.

Bulls should be comfortable only above 16400 zones… but markets are extremely choppy giving bullish closes n gapping down n vice versa. 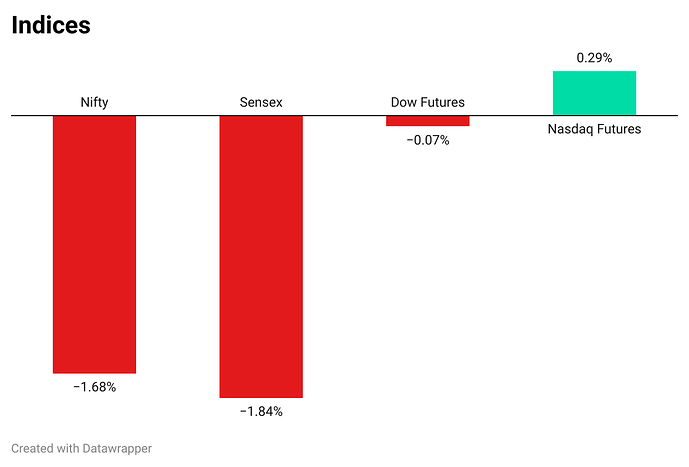 All sectoral indices ended the day in red. Nifty IT index was the top dragger, down by 2.17%. Followed by Energy, Bank, and Metal, each slipping by over 1.5%. Deepak Nitrite was the top gainer.

Firstsource Solutions was the top loser. 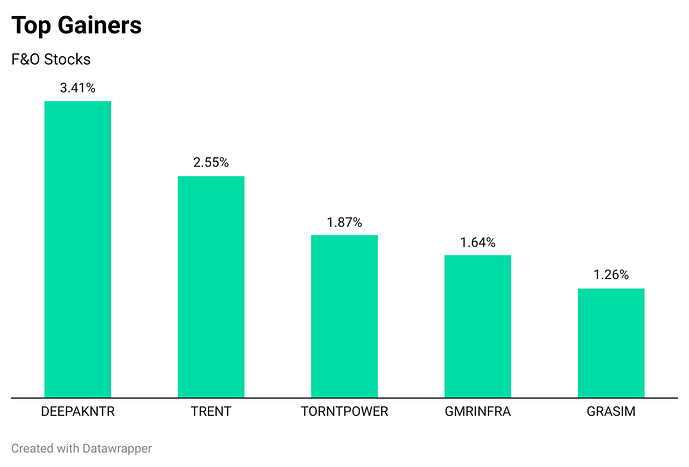 Reliance and Apollo Global Management has emerged as the frontrunner to acquire Boots pharmacies unit in UK, valuing the assets in the range of $7-8 billion.

Alembic Pharmaceuticals said it has received approval from the US health regulator to market Dasatinib tablets, used to treat certain types of cancers, in the American market.

The European Central Bank ended a long-running stimulus scheme on Thursday and signaled a series of rate hikes that may be scaled up from September if the inflation outlook fails to improve.

Russian central bank signaled it may not be done with monetary easing after lowering interest rates to their level before the invasion of Ukraine. On Friday it further reduced interest rates, from 11% to 9.5%.