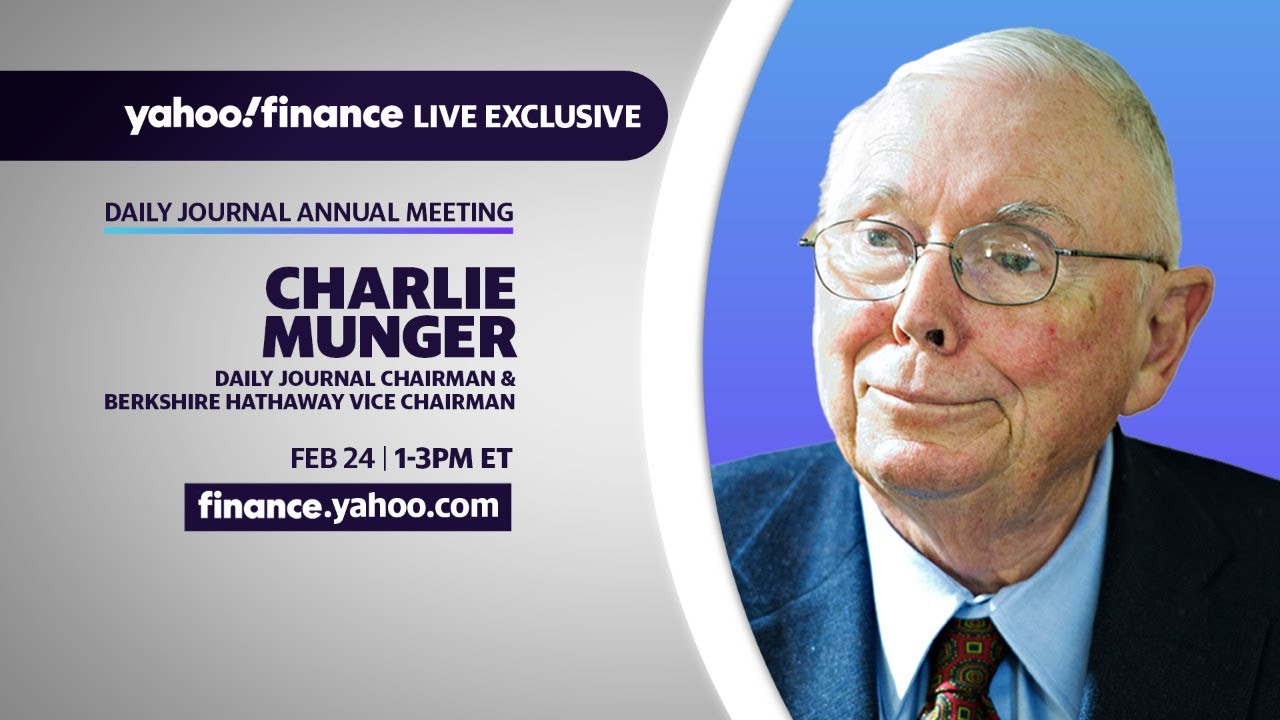 As always Chalie shared so many incredibly actionable commonsensical pieces of advice that we can all implement in our investing and even our lives. Some of his views on contemporary topics:

I don’t think Bitcoin is going to end up the medium of exchange for the world,” he said in response to a question about new technology disrupting the banking system. “It’s too volatile…to serve well as a medium of exchange.

No, we will not be following tesla into Bitcoin

Question: Would like to know which do you think is crazier bitcoin at 50 000 or Tesla’s fully diluted enterprise value of 1 trillion what do you make of these two pricings?

Charlie: Well I have the same difficulty that Samuel Johnson once had when he got a similar question and he said i can’t decide the order of presidency between a flee and a Laos and i feel the same way about those choices i don’t know which is worse.

Question: Many observers see market behavior that reminds them of the dot-com bubble wild speculation endless facts and IPOs soaring on their first day of trading do you agree that there is a close parallel to the late 90s and this is, therefore, must end badly.

Charlie: Yes i think it must end badly but i don’t know when.

Question: You know another shareholder Bill Roberts asked about SPACS and he points out it seems like everyone including actors athletes singers and politicians are getting into the business of promoting their own SPAC. What do you think of all of the SPACS and the promoters pushing them?

Charlie: Well I don’t participate at all and I think the world would be better off without them. I think this kind of crazy speculation in enterprises not even found or picked out yet is a sign of of an irritating bubble. It’s just that the investment banking profession will sell Shit as long as shit can be sold

Charlie: Well it’s it’s most egregious in the momentum trading by novice investors lured in by new types of brokerage operation like Robinhood and I think all of this activity is regrettable. I think civilization would do better without it you’ll remember that when the first big bubble came which was the south sea bubble in England back in the 1700s it created such havoc eventually when it blew up that England didn’t allow hardly any public trading and securities of any companies for decades thereafter. it just created the most unholy mess so human greed and the aggression of the brokerage community create these bubbles from time to time and I think wise people just stay out of them.

For someone who’s gonna be dead like in 3 years, he sure talks a lot.

I feel like it’s very logical to say that people/companies who are wealthy and are sitting on a huge pile of cash will feel scared of digital currency. As the conversion rate from dollars to crypto goes higher and higher, the fear will increase.

But on the other hand, I believe crypto will not be the sole medium of exchange in the whole world.

Yeah but I don’t get the whole lookin down upon new age traders is all. Like the elites in the trading biz generally are condescending towards the retail guys. So, I don’t really get that. It’s almost like they wanna keep the market all to themselves.

lookin down upon new age traders

Because some of them are being downright idiotic, like with all things and he’s referring to them. Not every trader is a rational trader.

Because some of them are being downright idiotic, like with all things and he’s referring to them. Not every trader is a rational trader.

People being idiotic isn’t a new thing. You just laugh at them and let it slide unless they are commiting a crime or doing anything illegal, which in the recent case of you know what, didn’t happen. I believe in a free market and government regulation unlike what Sebi does here should be kept to a minimum.

@RahulKhanna Hope you’re doing well. Just yesterday I was wondering it’s been quite some time I haven’t read a long article, in-depth coverage from you, or we had a banter

Thanks for sharing the highlights.

Yesterday I read in another news that Renew Power, (the first Indian major deal) is to take the SPAC route to get listed in Nasdaq. Then I read about Grofers too is in talks for a similar listing.

Can you throw some light on these?

Yesterday I read in another news that Renew Power, (the first Indian major deal) is to take the SPAC route to get listed in Nasdaq. Then I read about Grofers too is in talks for a similar listing.

Can you throw some light on these?

The last time we saw a SPAC boom was 2008 and we all know how that ended. Is there use for SPACs, yes. But most of the companies in SPACs aren’t really the best out there. Gotta agree with Charlie, the people who are making the most money in this frenzy are the investment bankers. No, we will not be following tesla into Bitcoin

Also, I could not understand one thing:-

On one hand, the Bitcoin algorithm is extremely computational and as per articles on google, generates CO2 equivalent to ~707,000 swipes of a Visa’s credit card. Bitcoin’s estimated annual consumption stands at 77.8 terawatt-hours, as against 9.6 terawatt-hours in 2017. This article says the annual carbon footprint of Bitcoin is equivalent to that of entire New Zealand.

Now on the other hand, Tesla that is the torchbearer of EV and green, renewable energy is buying bitcoins.

Do you see the contradiction?

Now on the other hand, Tesla that is the torchbearer of EV and green, renewable energy is buying bitcoins.

Do you see the contradiction?

The long read: The race is on to find a steady source of lithium, a key component in rechargeable electric car batteries. But while the EU focuses on emissions, the lithium gold rush threatens environmental damage on an industrial scale

He had seen many bubbles in his lifetime! When banks rise their interest rate, the stock market will correct.

The way Govt across the world are raising eyebrows on bitcoin and as the Indian Govt wants to ban it, it may rather turn out like cocaine. Hell expensive and illegal.

it will be constant in long term

Saw an article about SPACs recently -

(Bloomberg) -- It may turn out that five new special purpose acquisition companies per day was too many.SPAC mania is showing signs of hitting a stock-market saturation point, with an index tracking blank-check flyers suddenly down about 20% from its...