De-Dollarization - Are we heading to a New World Order?

This has always been a fascinating topic for folks tracking geopolitics and global economy for decades. Lot of people want it to happen (like me) and lot of other folks are pretty clear about it saying it isn’t going to happen in next decade or two at least. (pragmatic approach I’d say)

What is your take on this? Here are some of the questions which might be of interest to all of us.

Would love to hear your perspective on this incredibly fascinating topic.

would request to share this to your friends and others for wider reach. @Tradingqna It would be great to hear different views.

These discussions only really come to the fore during times of crises. And not only do they go silent after the crisis, the dependencies only deepen further. A quadrillion of something can only be truly replaced by a quadrillion of something else, Something as reliable, as stable, as predictable. And in my opinion, there is no nation in the world that currently has their books in order to provide that alternative, not even put together. Classic case of first the bad boys break up, every day it wakes up, somebody got a problem with US.

Its like a group project, in which one kid is doing all the heavy lifting, getting everyone atleast not an F and when it gets frustrated and asks others to pick their games up, they start hmm haahing and start scheming and daydreaming how they would all get As when they start running their own projects.

And at this point I would actually want to see them try, not threaten it, to actually try it. They will botch it up so bad, Dollar regime would look like the good ole’ days.

Yes, but also no. We are entering a new arc of Reserve Banking, in which whether they like it or not Central Banks will have to go digital. This will most likely get sorted out by a sequel of Bretton Woods in which all Banks would come and try to figure out a new digital reserve currency and US would regardless have the biggest seat at this table again, to “help” other nations figure it out. This doesn’t mean the new system would suddenly become more “fair”. value backs the currency, its not currency backing value. So even in this new system, the nations briging in the most value will have the biggest stacks. So no Russia isn’t providing any alternatives with the economy the size of a single washed-up US state, no matter how much it cries for attention.

Why has it not happened till now? What’s stopping it from happening ?

Simply because every nation worth its salt, has better relations, more trust and more to gain from US than each other. China, may hype up Russia all it wants, but when it comes to speaking with money and interests, it knows where to look. Same way India, can roleplay non-alignment all it wants, but we don’t see many Indian engineers learning chinese for improved synergies with Chinese companies.Yes India is taking discounted oil from Russia, but if US, Saudi or Cambodia were giving it discounted oil, we would’ve taken that too. Everybody likes to act tough, because they’ve lost fear and respect for US, since it got embroiled in domestic NPC issues. But the moment US decides to take it ball home, everyone will start saying they were just joking man. US needs less from the world than the world needs from US 1 to 1.

If it happens, what are the pros and cons to the world? and especially to India ?

If everyone wants to play their own game? Yes, then they will have to start doing leg days and improving and stabilizing their economies and their currencies. Reduce dependencies, sober up and deliver the goods. This is good to dream about, but the end result always looks like some variation of “Great Leap Forward” where everyone starts making shoddy goods at home resulting in mass wastage and pyrrhic games. There is more to be gained working together, even poorly than working poorly alone.

Drastic alternatives are good only when they outright solve the underlying problem. If all it promises is to replace green paper with red paper or golden coins to later have the same problem. Well just keep it green then, at least it has a proven track record of many decades going for it.

The answer can be a yes and a no. This is in talks for years now where the Banks, corporations, and countries show their intentions towards this. No notable actions after that. Many factors are in the picture. Countries with instability and hyperinflation will look for dollarization. Though steps are taken, I think it is quite a long way for this to be possible given the share the US owns.

De-dollarization - Is it really possible ? If yes, by when ?

Yes perhaps but not much. America is still the best democracy and their economy is still very strong being in country that has excels very well in innovation. Apart from this most of South American countries are dollarised. De-dollarization may happen as soon OPEC and Norway abandon oil sales in dollar. But even this most economists say is a doubt because productivity is what brings prosperity. Many countries use USD incase hyperinflation as well. In Zimbabwe they started using USD first after Mugabe went crazy with printing press.

Why has it not happened till now? What’s stopping it from happening ?

Because after the Bretton woods system when America was nearly about to default on gold reserve back in 1971 , Nixon severed the gold from the usd and we went into fiat currency from then on. After that Nixon and Kissinger made a deal with Saudis(King Faisal) that all oil needs to sold and priced in dollars. They tried to do same deal with Iran but shah outplayed both them. This is what gives dollars the power of being reserve currency. Because to buy oil you need to buy dollars. Everyone was okay with this for time being untill they got tired of Fed reserve money printing policies because of deficit spending US did i.e Vietnam war , korean war.
In 2003 Iraq Saddam Hussein started trading oil in Euros and we all know how that went on.
Libya Muammar Gaddafi tried to sell oil in gold dinar and other currencies and we know the freedom they received.
Syria tried to sell oil in euro and they received freedom.

As a matter of fact there was a terrible terrorist group called ISIS which in reality conquered all oil fields only for that oil to be sold to these US oil corporation in dollars. Even Putin said this in a Russia news about how ridiculous US foreign policy was giving weapons to these mercenaries and them joining ISIS and US oil corporation buying oil from them. Funny how people thought Obama was a great nice guy when ISIS was created because of his foregin policy.

The reason why dollar has value because of the sole reason majority of oil is sold and priced in dollars. This is what enables those guys in fed reserve to print money like anything.

Now Saudi has said it will use yuan , I am pretty sure that gang in Washington isn’t simply going to sit and watch by thinking giving of freedom to Saudi citizens

We are entering a new arc of monetary system of CDBC but that is quite distant. Whatever less govts are always inclined to print money i.e fiat money.

If it happens, what are the pros and cons to the world ? and especially to India

Lets talk about what has actually changed. Frankly a lot of govt have tried to bypass dollar but they have all done worse even including us Indians.

We buy oil with Iran in rupees and commodities. Has anything changed ? I don’t think so. Btw Iran doesn’t sell oil in USD. Frankly they should be wealthy but aren’t because they are sanctioned. Their inflation is high.

We made BRICS bank Brazil, Russia, india , china and south africa. Did this protect rupee depreciation against the dollar ? Not even much. the opposite happened. 1USD = 76rupees . Frankly our real estate grew up because of dollar remittance coming from abroad.

Japan bypass dollars. China and Japan agrees for currency swaps. Were japenese able to create inflation after such a long time ? The real answer no. And their demographics are worse with old people more than young people with declining birth rates.

There aren’t real pros because we have fiat money system everywhere and govts always print more money than it is required. As ray dalio said unless you are raising your productivity by making goods and services none of us will be wealthy by printing money.

Now there is a major con going out dollar standard especially having yuan as reserve currency. we are more dependent on Chinese now. We are already dependedent on them for electronic goods lucky we have south korea, Taiwan and japan but having yuan as reserve currency than dollars will be difficult for india. Chinese have more leverage to sanction us. Worst case they declare war and capture territory and ban us from getting oil via sanctions.

What will be the triggers for it to happen

Definitely china for sure. Frankly US doesn’t care about Ukraine and Russia, even Russia trading oil in rubles. They have been sanctioned out from rest of dollarised economy that they are hardly doing well. Remember most wars are bankers wars. But recently saudi has said they would trade oil with China in yuan. This is enough concern for that gang in Washington. Probably china might make sure they get oil if they planned to invade Taiwan or take those disputed islands. But this surely is a start for something new. 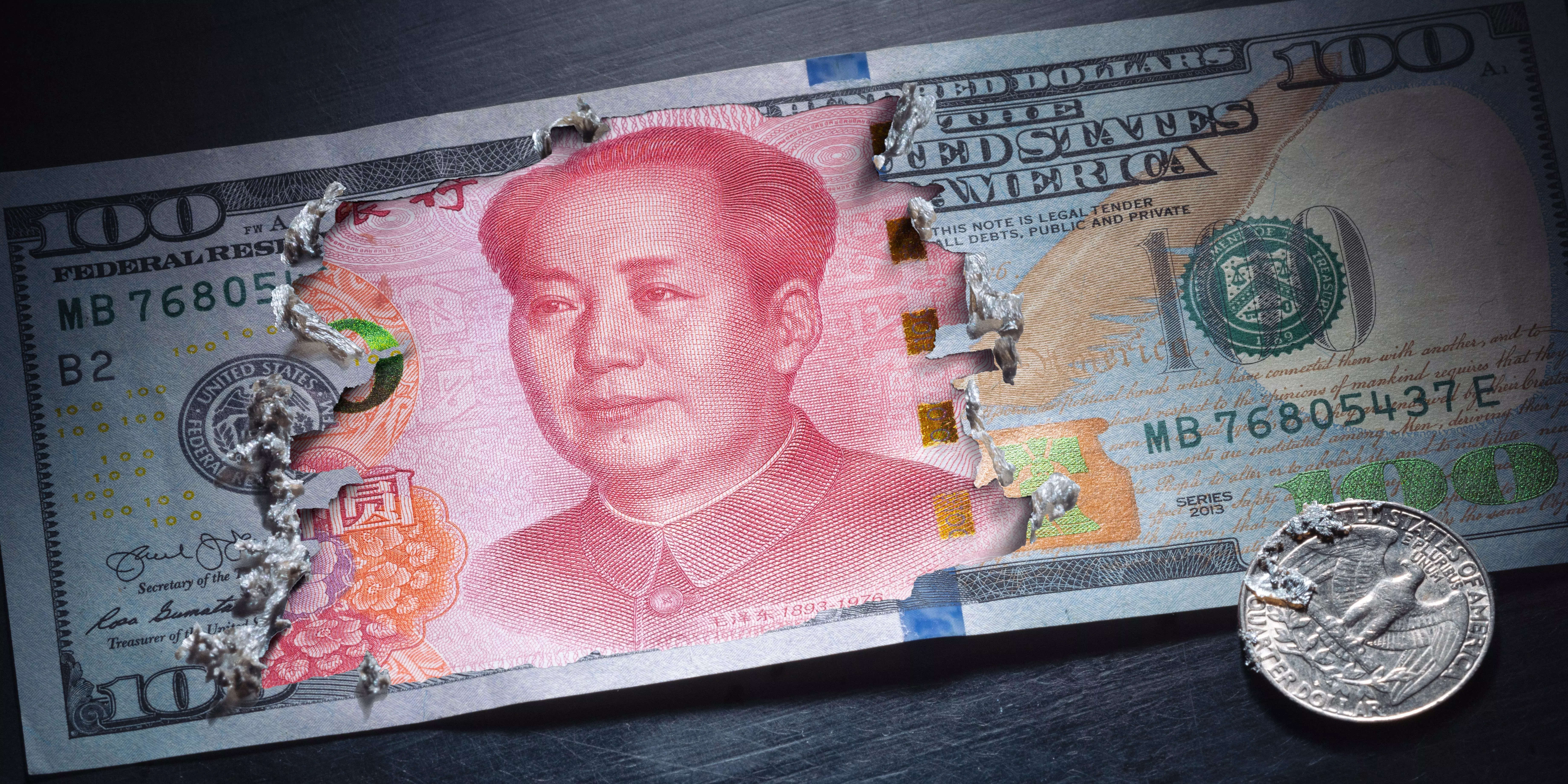 Israel adds China's yuan for the first time ever while cutting its dollar...

For the first time ever, they yuan is part of Israel's central bank reserves, and its allocation for US dollars has been cut.

This is an interesting development. In order to weather the sanctions, Russia is trying to forge closer ties with Asia, seeking to supplant the markets it lost in the row with the European Union and the United States. In a video address to the BRICS Business Forum participants, Putin...

China supplies lot of consumer goods, industrial equipment to all the countries. So all major economies need yuan somewhat. China & India can settle trade via yuan & rupees with SBI bank of china Russian anks as nodal banks. India not openly antagonising usa bcos us companies using India as a a call centre , services processing centre is huge.wr are one sixth of China’s manufacturing might reliance getting cheap Russian oil but can only earn processing profit.oil retail is in the hans of ioc/BPCL/hindpetro.they are also getting cheap crude. Everbody is mum about it. India Russia trade in pharma,consumer goods is going to be huge in rupee/ruble trade. We need only weapons/weapons technology & oil from russia.us$ is going to be byepassed. 140+135 billion population (china+India) only matters.w.europe is full of oldies.add Indonesia other south Asian countries more than half of global population.china has colonised entire African continent with building works & goods supplies.

BRIC has been vocal about shifting from USD since 2008. Probably the war and related sanctions would act as the booster shot in this direction.