I just saw this news about SEBI raids where investment advisors were found doing manipulation via telegram. Modus being these guys buy the stock early…posting it on their telegram channel and once the stock goes up (after being followed by thousands of members) , dump the stock and exit with hefty profits. 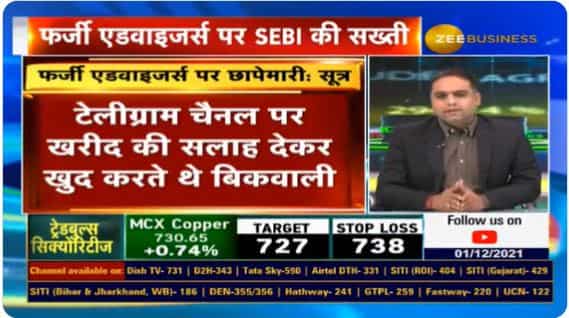 SEBI has conducted a search and seizure operations after nearly four years at two places in Gujarat – Ahmedabad and Mehsana. The operation was carried out on companies who ran their channel on social media platform Telegram. The followers of these...

I have few doubts regarding investor advisors :

Most people do it under the umbrella of ‘educational material’ since the laws are silent on that.

People write a disclaimer saying that their material is intended with the purpose of ‘educating’ the viewer on how to trade and invest in the securities market.

The best advice I can give you is to spend an hour with a legal counsel who knows this stuff. You will get all your queries answered and have peace of mind. There are a lot of nuances to the letter of the law.

If you take money directly for giving out advice, you are clearly violating the SEBI RIA/RA regulations.

The loophole most people use today is by giving the advice/Gyan for free but monetizing by ads (youtube) due to increased following or by asking to pay to listen to their views (youtube paid channels, in-person training) or by teaching you how to do it (in-person or online). Currently, no regulation explicitly prohibits this. But I know that regulators are working on something.

If someone is trying to manipulate or front-run a stock like in this news item, which is telling people to buy and then try selling them the penny stock, that is a violation in any case.

Yes, Indeed. Although another way to see the question isn’t primarily whether the people engaging in tipstering, pumping dumping and frontrunning do not know whether what they are doing it is illegal or a regulatory violation or not. They are aware of that what they are doing is wrong and do it anyway.

This is a symptom which stems from an underlying disease that plagues almost every type of markets in the world, especially a relatively newer developing market such as India. Indian markets throughout their history have been a Tipster’s market, very similar to how American and British markets were when they started. Even someone as smart as Newton lost his lifesavings after being tipped into investing into the South Sea pump and dump operation.

India is a trust based nation, a safety in numbers type of country similar to other Asian cultures. Indians generally take decisions if someone tells them to and seems to play the part correct. There is a reliance on real estate brokers to get us houses, pandits to find some suitable strangers to marry, uncles to tell what career is the best, friends to buy insurance policies from and the government to decide the rest.

Then this is almost a certainty that Indians would go around asking what to do when they come to something as alluring and as complicated as the financial markets. Financial news channels spend almost their airing time telling the investor what stocks to buy, or what to do after they have bought it, by calling and asking the gurus. What is left is spent on analysing what counters did RJ entered in or exited, as if the person with 50,000 rupees in capital would be having the exact same investment logic and goals as RJ or Porinju does with their much bigger stakes.

The telegram and scammy boiler room Junta is the watered down/Spiked up version of the same idea. It would seem many members of these groups, channels, servers, or portals are innocent people being duped, but a lot of them know the risks, and they have not come to trade to beat inflation. They have come their with hopes to make a quick buck, or windfall returns. Based on this premise it makes absolute rational sense for them to turn to someone saying they are Wolf of Random Street, or The Day Trading God. Than to people with sense saying, best they can do for them is match the market returns, or telling them that trading is risky. They either know that already or do not wish to be told that.

Although its not all doom or gloom in this regard. Indian markets are developing over time. The regulators which are already on par with Global standards are being given more teeth and claws to root out market efficiencies.

The clear example of this progress is being seeing in Brokers. Who were initially all very scammy, front runny, fly by night operations. But overtime due to brokers like Zerodha, Bank Brokers and other big players. Your likelyhood of running into a scammy brokers is ofcourse reducing.

Overtime as the market expands and strengthens like US and UK, the percentage of these bad actors would reduce to a percentage so small, it can be rounded off to zero.

@nithin what if a person give advise to hedge funds, trading firms, banks etc , and receive commision, remuneration or whatever name called. Any regulatory compliances? Also assume that an LLP or company is carrying this obejective which I think is done by many , any regulatory compliance is required to do so?

The most craziest fact is :

In a country where we have 5+ Crore individual demat accts (in CDSL itself), Having only 2000 odd registered folks is absolutely startling to say the least.

@nithin what if a person give advise to hedge funds, trading firms, banks etc , and receive commision, remuneration or whatever name called. Any regulatory compliances? Also assume that an LLP or company is carrying this obejective which I think is done by many , any regulatory compliance is required to do so?

Any advice for consideration requires RIA/RA license, unless if it is considered an incidental activity. Check this FAQ (search for incidental)

Mutual Fund Distributors registered with Association of Mutual Funds in India
(AMFI) can only provide basic advice to its mutual funds clients incidental to its
distribution activity.

Members of the Institute of Company Secretaries of India, Institute of Chartered
Accountants of India, Institute of Cost and Works Accountants of India who
provide investment advice to their clients incidental to their professional services
are exempted from obtaining registration under IA Regulations.
For example :- An advice by a professional CA as a tax consultant to his tax
client for investing in ELSS in the course of tax planning will be treated as
incidental to his profession as a tax consultant.
However, if they are engaged in providing investment advisory services in
securities as an activity or business to clients or investors which is not incidental
to their main activity then they are required to get registration as an investment
adviser.

Stock brokers registered under SEBI (Stock brokers and Sub-brokers)
Regulations, 1992 can only provide basic advice to its broking clients incidental
to their broking activity. Incidental activity with respect to stock broking means
providing basic advice pertaining to investment in securities to the broking
clients.

This is the latest news where SEBI has once again taken strong action against telegram groups where stock price manipulation is done by illegal means by one of the popular telegram channel named bullrun 2017. Same modus - Buy - share in grp - pump and then dump on various occasions.