All the sectoral indices finished the week in green with Nifty Bank, Auto and Realty leading the gains, up over 5% for the week. Here’s how the major markets around the world fared; Things to watch out for in the week;

Primary market will be back in action after a brief pause as Ruchi Soya’s Rs. 4,300 crore follow-on public offering (FPO) will be opening for subscription on 24th March and will close on 28th March. The company has set price band of Rs. 615 - 650 for the issue. You can check out more details here: Everything You Need to Know About Ruchi Soya FPO

Key economic events for the week;

What are you looking forward to in the coming week? Share below

With crude prices surging again (back above 110$), expecting financials to take a breather and mrkt to be range bound and expecting selling from higher levels (btwn 17400-500 zones)

I will be positionally long in energy , agri n fertilizer based stocks and will look to buy puts in financials for couple of days.

I will be positionally long in energy , agri n fertilizer based stocks and will look to buy puts in financials for couple of days.

Fertilizer stocks were up today. Financials were down. 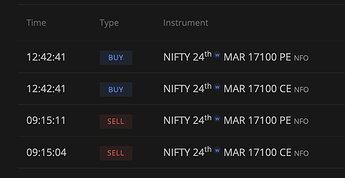 I was sitting in a short straddle @ 17100 from the market open. When I noticed the market covering back up above 17080 after a nice volatility contraction and jumped out with more than decent profit for the day.

Benchmark indexes recovered from yesterday’s loss and gained more than 1%, following global cues. US markets too, look set for a positive start. 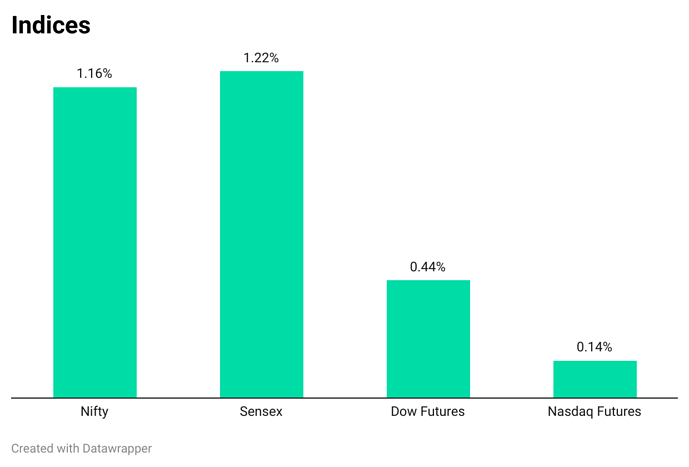 Nifty IT topped the sector indices with a 2% rise, while Nifty FMCG and Realty were the worst performers, falling nearly 1%.

Rain Industries was the top gainer.

ZEEL was the top loser. 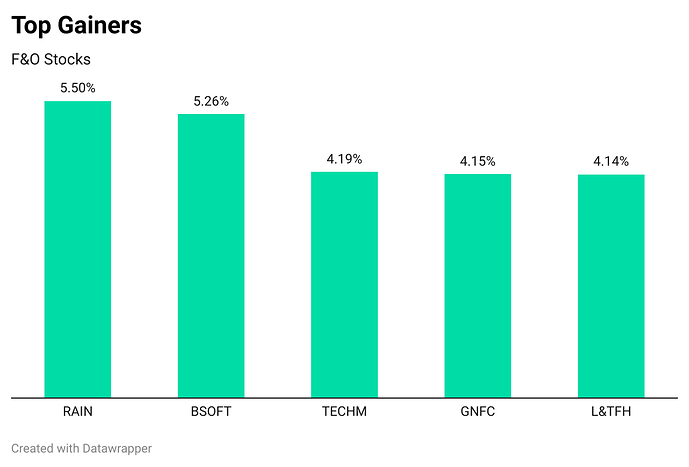 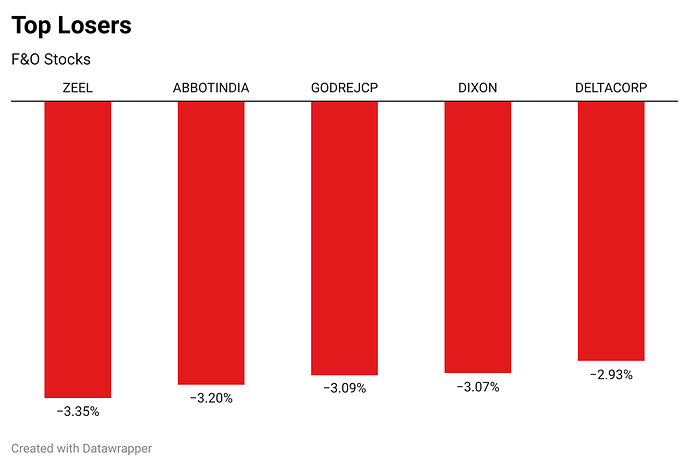 Tata Motors announced on Tuesday that it will hike its commercial vehicles’ prices by 2-2.5 % from April 1, 2022. The price rise though will depend on individual model and variant, the company said.

Infosys to acquire Germany-based digital experience, marketing agency, Oddity for upto €50m. The acquisition of Oddity is expected to close during the first quarter of fiscal 2023.

Petrol and diesel prices were raised by over 80 paise a litre on March 22 after a status quo on rates for 137 days. Cooking gas prices too were raised the same day. Domestic LPG cylinder prices have been hiked by over Rs 50 in Delhi, Mumbai, and other cities with effect from March 22.

Rating agency Fitch on Tuesday slashed India’s growth forecast for the next fiscal to 8.5% from 10.3%, citing sharply high energy prices on account of the Russia-Ukraine war.

Zee Entertainment Enterprises slumped more than 3% after a division bench of the Bombay High Court vacated its earlier order restraining the NCLT from hearing an appeal by Invesco.

The 10-year U.S. Treasury yield topped 2.34% as Powell said on Monday that the Fed would continue to raise interest rates until inflation is under control and that hikes could get even more aggressive than last week’s 25 basis point increase.

Chinese smartphone maker Xiaomi Corp reported a bigger-than-expected 21.4% rise in fourth-quarter revenue, as industry shipments of handsets slowly tick up following a global chip shortage and the peak of the pandemic.

Nifty and Sensex tumbled from their day’s highs in a volatile session, down by around 0.5% for the day. Dow and Nasdaq futures indicate a weak start for US markets. 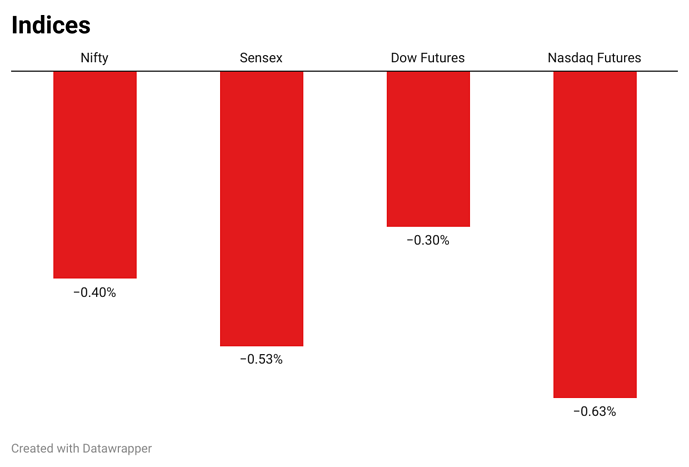 On the sectoral front, Nifty Metal index was the top performer, up by 1.2%. Nifty Auto was the top loser, down by 1%. Chambal Fertilisers was the top loser. 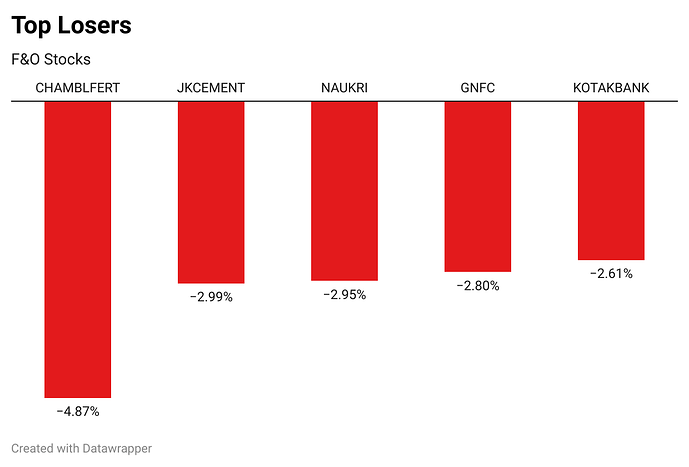 Indian Hotels gains 3% as board approves Rs 2,000-crore QIP; A board meeting is scheduled to be held on March 25, 2022, to consider and approve the issue price, including a discount, for the equity shares to be allotted to QIB

CREDAI says developers have decided to halt the purchase of materials as they believe elevated costs will ultimately result in projects getting stalled.

Hero MotoCorp fell more than 1% after the IT department began searches at the company’s premises. The tax department also raided Hero MotoCorp Chairman Pawan Munjal and other senior executives of the company for suspected tax evasion.

India has achieved the ambitious goods export target of $400 billion for the first time ever ahead of schedule for the financial year 2021-22 (till March 22, 2022). Prime Minister Modi on Wednesday congratulated farmers, weavers, MSMEs, manufacturers, and exporters for success.

The world’s second largest steel producer, ArcelorMittal, has entered into a strategic partnership with one of India’s leading renewable energy companies, the Greenko Group, for a project that will power the decarbonization journey of ArcelorMittal Nippon Steel India.

British inflation shot up faster than expected last month to hit a new 30-year high, worsening a historic squeeze on household finances; The Office for National Statistics said consumer prices rose by 6.2% in February after a 5.5% rise in January, its highest rate since March 1992. Nifty and Sensex recovered from day’s lows to close the volatile session flat. Dow and Nasdaq futures indicate a good start for US markets. 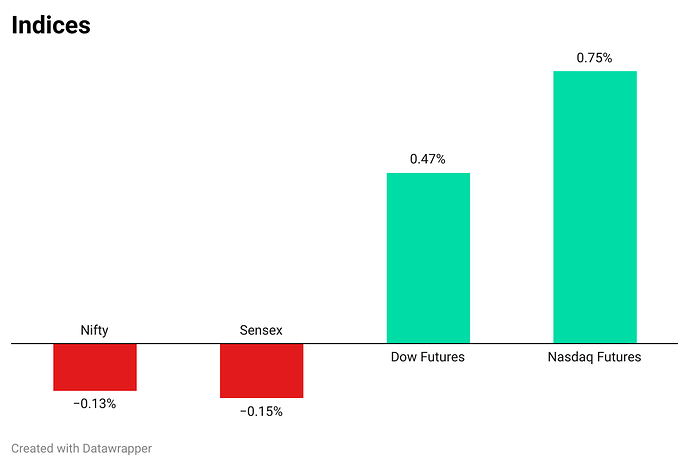 Nifty Media index was the top gainer for the day, surging 5.9%. Nifty Bank, Auto and PSU Bank were the only sectors in red with Nifty Bank declining the most, down 1.7%. Zee Entertainment was the top gainer, surging around 17% after Invesco withdrew its demand for a board overhaul. 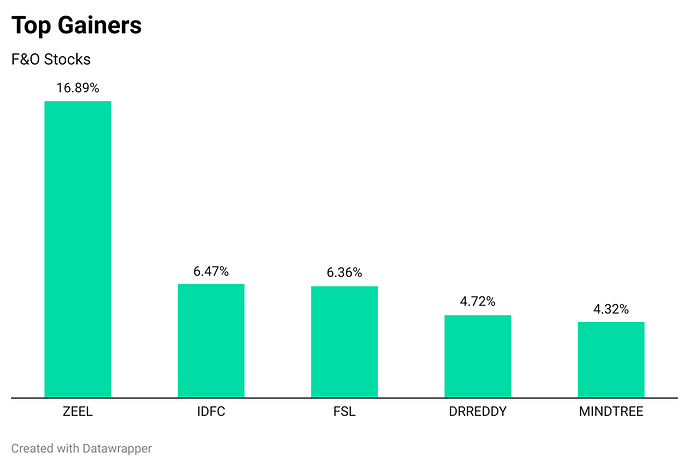 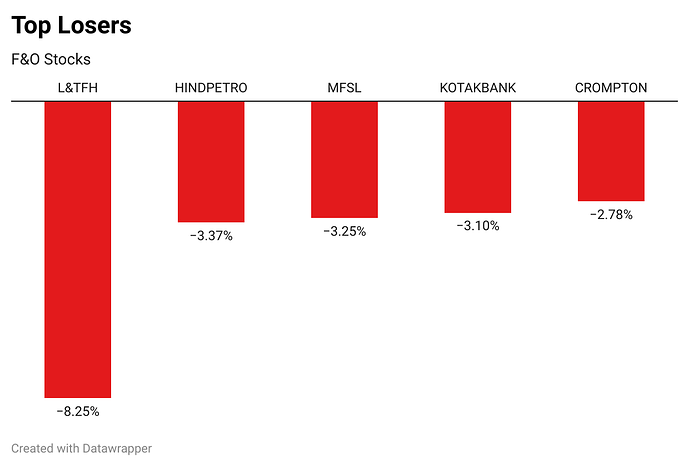 ZEEL share price surged around 17% after Invesco withdrew its demand for a board overhaul. Invesco stated that it’ll not hold an extraordinary general meeting to add six independent directors since Zee’s merger with Sony would achieve its goal of strengthening board oversight.

India’s top fuel retailers IOC, BPCL, and HPCL have together lost around $2.25bn (Rs. 19,000 crore) in revenue between November and March by keeping petrol and diesel prices unchanged despite a sharp rise in crude oil prices, Moody’s Investors Service said on Thursday.

Consumer sentiments in India have witnessed a sharp recovery since June 2021 and continue to rise week after week on the back of significant surge in income of middle-income households, the Centre for Monitoring Indian Economy said.

Russian rouble briefly leaped to a three-week high past 95 against the dollar on Wednesday in Moscow, before settling close to 100, after President Vladimir Putin said Russia would start selling its gas to “unfriendly countries” in roubles.

Norway’s central bank hikes interest rates for the third time. The monetary policy committee of Norges Bank raised the sight deposit rate from 0.50% to 0.75. While the war in Ukraine has increased concern about the economic future.

French business and manufacturing confidence slumped in March to the lowest levels in almost a year as optimism on the production outlook declined sharply.

Hungary resumed raising the effective interest rate after the central bank said that the war in neighboring Ukraine will lead to a sharply deteriorating inflation outlook.

What we are witnessing is narrow range consolidation in the index. Monthly expiry premiums on both call and put side are being eaten up currently as breakfast

I dont want to be trapped on the wrong side in index as move can come on any side.

But, one thing to notice though is as we are approaching the quarter and financial year ending, we may see NAV adjustment trades.

Benchmark indices failed to hold their gains, closing lower following a mixed trend in global markets. US futures are slightly higher, indicating a positive start to the US market. 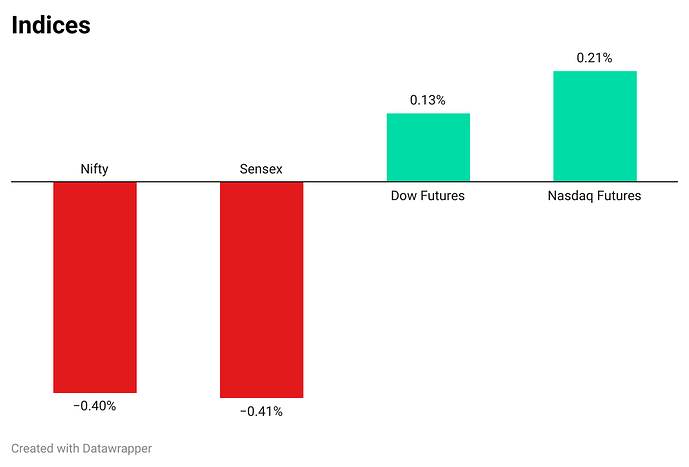 Among the sectoral indices, Nifty Realty index was the top gainer for the day, gaining 1.2%. The top losers were Nifty Pharma and IT, both of which fell by nearly 1%. Indus Towers was the top loser. 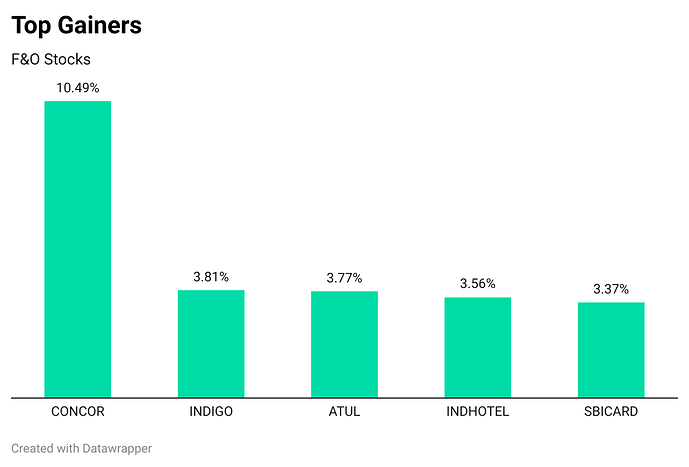 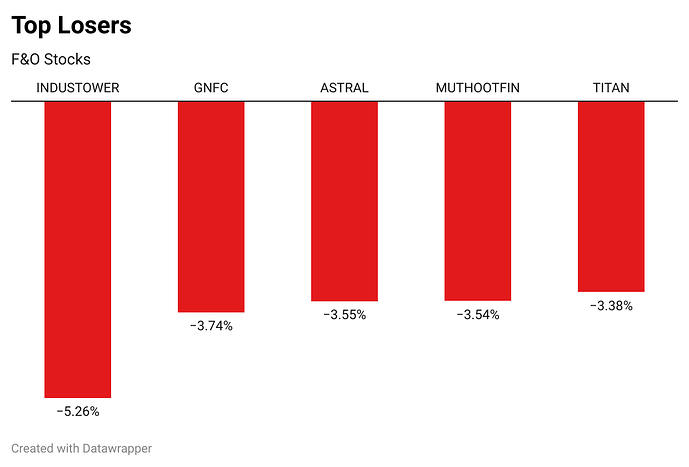 Airtel pre-paid Rs. 8,815 cr of spectrum dues to reduce interest expenses; This is the second such prepayment by Airtel in the last three months and comes on the back of strong cash flow generation, equity infusion, and borrowing at significantly lower interest rates

Ola has signed an agreement to acquire neo bank Avail Finance. The acquisition is a key step in Ola’s broader push into the fintech space as it looks to build a mobility-focused financial services business under Ola Financial.

Cement prices rose in March over the previous month. After being flat for a quarter until February, prices spiked past the November peak. By several reports, the monthly average cement price in India grew by more than 10% to Rs 395 per 50 kg bag in March 2022.

Banks had a 37.9% share of the microfinance industry in the quarter ended December 2021, according to a report by CRIF High Mark Credit Information Services. The study also finds that NBFCs constitute the second largest segment with a share of more than 33% of the market.

New Zealand mortgage rates are set to rise above 5% for the first time in seven years, damping economic growth and exerting further downward pressure on a cooling housing market.

World stocks are headed for a second consecutive week of gains for the first time in 2022 though sentiment was broadly cautious as markets evaluated the economic risks from the Federal Reserve’s policy tightening and Russia’s war in Ukraine.

Canada will increase oil and gas exports by the equivalent of 300,000 barrels a day to help nations that are trying to shift away from Russian supplies.