A recap of what the markets were up to last week;

Indian as well as the markets around the world rebounded after a steep fall on Monday. Sensex and Nifty ended the week with marginal gains.

Other major Asian markets were mixed, while the US and European markets ended the week with substantial gains. Here’s how the major sectors performed over the past week; Things to look forward to in the coming week:

No IPOs will be open for subscription in the final week of 2021. But there are 3 listings lined up, that of, HP Adhesives (27th December), Supriya Lifescience (28th December), and CMS Info Systems (31st December).

Key economic events to look forward to for the week

What’s on your watchlist for the week? Share below

Nifty and Sensex rebounded from the day’s lows to close up by half a percent each. Dow and Nasdaq futures indicate a positive start for US markets. 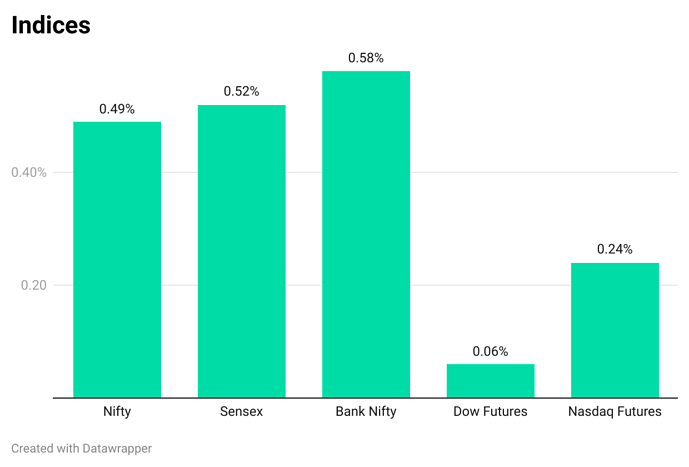 On the sectoral front, Pharma index was the top gainer. While the Media was the top loser. GMR Infra surged over 7% after it signed an agreement for the development of airport project in Medan, Indonesia.

RBL Bank slipped over -18% after MD & CEO went on sudden leave and RBI appointed an additional director to the board. Reliance received a nod from NCLT to withdraw its application for segregating the oil-to-chemical (O2C) business from the company.

Buoyed by the government’s Rs 2.3 lakh crore policy push for self-reliant India, the domestic electronics manufacturing industry is expected to see 30% growth in the next fiscal to be worth nearly Rs 7 lakh crore.

HP Adhesives made a strong debut, surging over 20% to the issue price on the first day of trading.

Investments in the Indian market through participatory notes (P-notes) dropped to Rs 94,826 crore till November-end after hitting a 43-month high in the preceding month. Story here.

China’s industrial profit growth decelerated to 9% in November from a year earlier, the weakest in more than a year, as high commodity prices hit profitability.

Japan’s retail sales increase for a third straight month, as easing virus concerns fuel spending by consumers before the emergence of omicron.

Dont be so cheered by upmove in the headline indices as they are still well within the range of 16900-17200 as expected last week. Just buy near support and sell near resistance pattern is going on.

Main buying is going on in the small and midcaps. Thats the space to be in right now to make cool short term trading returns as many stocks are popping up by 20-40% in a span of couple of days.

Update : Nifty Smallcap and midcap index firing as expected. So many stocks at Upper circuit levels.

Benchmark indices extended their gains for the second straight day, climbing by over 0.8%. Dow and Nasdaq futures continue to trade higher, signaling a bullish rise for US markets. 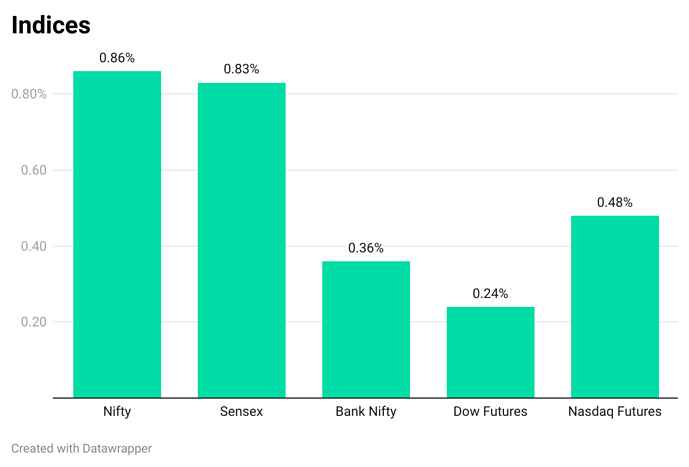 All the sectoral indices finished in the green, with Nifty Auto topping the list with a 1.34% gain. PVR Limited was the top loser. Indian economy is likely to maintain real GDP growth of 9% each in FY2022 and FY2023 amid uncertainty triggered by the Omicron variant, according to ICRA.

Sun Pharma and Cipla received EUA permission from the DCGI for the launch of an anti-viral drug to treat mild-to-moderate Covid-19.

Shares of Supriya Lifescience listed at over 55% to the issue price. Closing the day up by over 42%.

Reliance Retail Ventures, the retail unit of Reliance is likely to acquire a minority stake in warehouse robotics company Addverb Technologies for around ₹300 crores.

The Department of Telecommunications announced that commercial 5G services will be rolled out in 13 Indian cities in India, including the metropolises, in the new year 2022.

China’s central bank vowed to take its share of responsibility to stabilize the macroeconomy and pro-actively introduce monetary policies that are conducive to economic stability. More here.

PVR Limited was the top loser.

During the last two years when all cinemas houses were nearly closed, PVR and Inox borrowed heavily and even recovered after the crash although they shouldn’t have. Now that people have started going to cinema halls again these two stocks will start falling.

btwn these two levels…timepass moves.

I think we are in a boring expiry. I hope im wrong.

Are you sure today is the expiry for the dec contracts?

But levels remain intact for both days

year end NAV adjustments make…downside capped I think…so expecting rangebound play mostly…but if i have to bet one side for sure, maybe upside seems more likely than downside.

Yes, I agree. It will be range bound for next 2-3 days… It has been a volatile week… market will take a pause here…

Markets slipped from day’s highs to end the session marginally lower. US futures are slightly up, indicating positive opening for US markets. 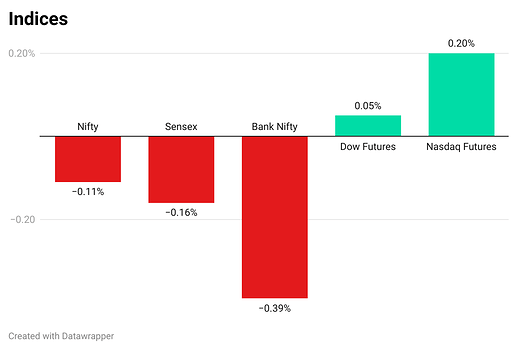 On the sectoral front Pharma and Auto were the only gainers. Metal and Media were the top draggers, down by around a percent each. Vodafone Idea was the top gainer.

JK Cement was the top loser. 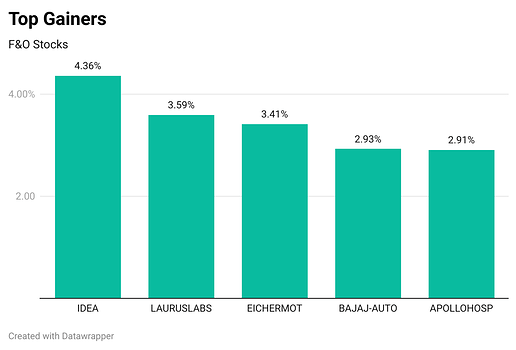 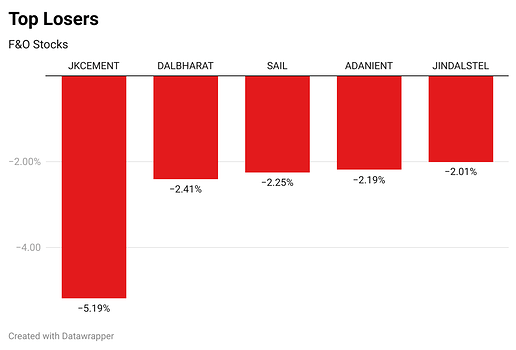 Bajaj Auto has announced investment of ₹300 crore to set-up an EV manufacturing unit in Pune. With a production capacity of 500,000 EVs per annum.

Amara Raja Batteries will invest €10 million in InoBat Auto, a European Group focused on research and development in the field of batteries for electric vehicles and production of lithium-ion battery cells.

NTPC will reduce its stake in its newly formed renewable energy (RE) arm as it plans to list it in the coming financial year.

Bad loans across banks fell to a six-year low of 6.9% as of September, according to the RBI. But stress tests conducted by the central bank suggest that gross non-performing assets may rise again. Story here.

As expected…its currently dead flat markets from yesterday. Hope so ur premiums are saved (for option buyers)

We will look for expiry based move slowly as compression ends. Will update if I find anything interesting here

btwn these two levels…timepass moves.

I think we are in a boring expiry. I hope im wrong

As expected one of the most boring expiry right at the end of the year.

Benchmark indices ended another trading session marginally on the lower side. Dow and Nasdaq futures are slightly up, indicating a positive start for US markets. 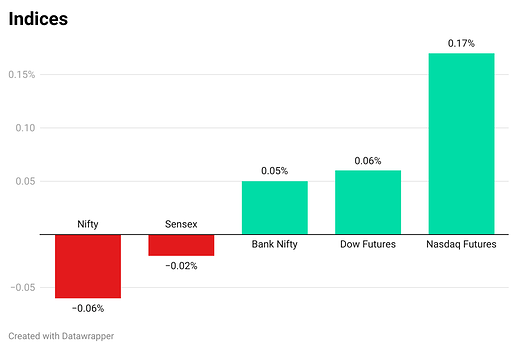 Nifty IT was the top gainer for the day. Nifty Metal continued its slide downwards, down by around -1.2%. Persistent Systems was the top gainer.

RBL Bank was the top loser. 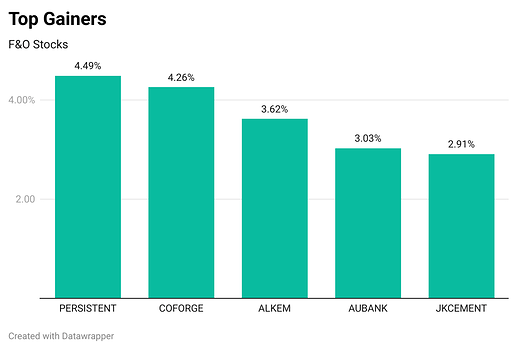 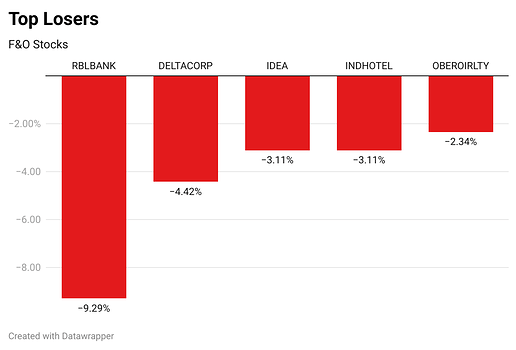 A Rs 300 cr loan that was written off within seven months of being sanctioned has emerged as the key reason for RBI’s sudden intervention in RBL Bank.

Govt’s disinvestment target of Rs 1.75 trillion for the fiscal is unlikely to be met over the uncertainty over the privatization of BPCL.

The Union budget for FY23 may introduce changes to customs duties as the govt. leans on tariff rationalization to promote local manufacturing as per reports.

NTPC arm NREL to float a global tender to set up a 3GW RE project worth Rs 15,000 crore by February.

Samsung Group is in talks to buy Biogen in a deal that could be worth $42 billion.

Three consecutive days of narrow range in nifty. break of this range will decide the further movement. Holiday season for FIIs causing indecision in indian markets

Nifty and Sensex surged over 0.8% in the final trading session of the year; rallying up to 24% in the year. Dow and Nasdaq futures are trading slightly lower, indicating a weak start for US markets. 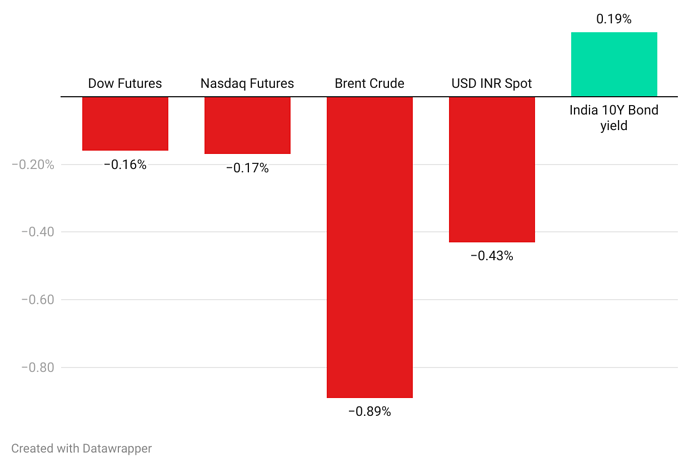 All sectors closed the day in green. Nifty Metal was the highest gainer, surging by over 1.9%. IDFC surged by over 13% after IDFC First Bank said that its board has favored the merger of IDFC and IDFC Financial Holding with the bank.

RBL Bank was the top loser, continuing its downward slide. India’s fiscal deficit in April-November, the first eight months of the current fiscal year, narrowed to 46.2% of the full-year budgeted target, helped by a rise in tax collections.

Tech Mahindra has approved a proposal for the acquisition of a 100% stake in Allyis India and Green Investments, for a total consideration of up to $125 million.

The GST Council in its meeting decided that the rate hike on textiles from 5% to 12% will be deferred, amid objections from states and the industry.

Reliance New Energy Solar an arm of Reliance, has signed an agreement to acquire a 100% stake in UK-based Faradion Limited for a value of ₤100m.