Recap of what the markets were up to in the week gone by;

Sensex and Nifty recovered after posting losses on the first three days of trading to close the week on a positive note. Sensex rising by almost 1%, while Nifty by half-a-percent.

On the sectoral front only Nifty Bank, Auto and PSU Bank indexes managed to end the week with gains. Nifty Metal index was the top loser, down by 8.7%. Here’s what the FIIs and DIIs were up to; US markets rebounded sharply in the week ended May 27, snapping seven week losing streak. Here’s how the major markets around the world fared; Things to watch out for in the coming week

While IPO markets hits a pause in the comping week. Shares of three companies will be listing on the exchanges, that of Ethos, eMudhra and Aether Industries.

Shares of Ethos will list on the exchanges on Monday, 30th May. eMudhra on Wednesday, 1st June. While Aether Industries on Friday, 3rd June.

Earnings to watch out for:

On the earnings front, most notable names will be reporting their earnings on Monday, 30th May, with nothing much to look forward to for the remaining week.

With bank nifty breaking out and nifty IT recovering smartly from it needs to be seen how much can the mrkt go up.

Nifty and Senxes extended their gains for third straight session, surging around 1.9% for the day. US futures too are trading higher, indicating a positive opening for US markets. 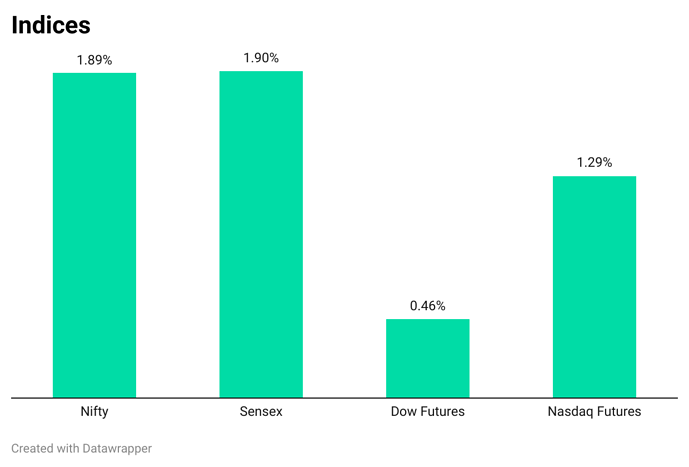 All sectoral indices ended the day in green. With Nifty Realty topping the tables, up by over 4%. Followed by Nifty IT, Media and PSU Bank indexes, each surging over 3%. 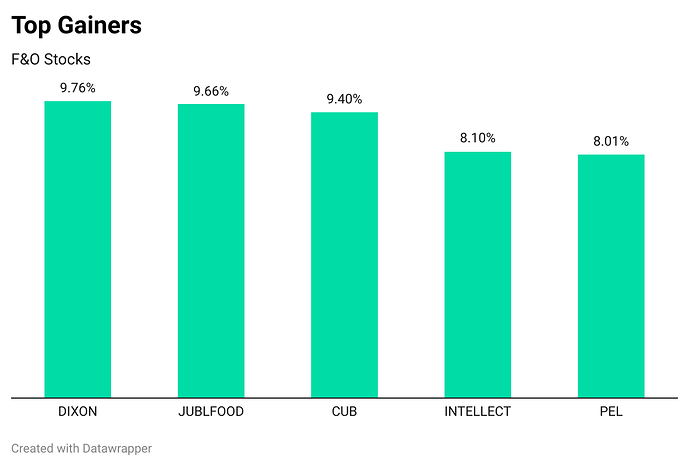 Larsen & Toubro received contract order for the Chennai Metro Rail Project. According to the company’s project classification, the value of a significant order ranges from Rs 1,000 crore to Rs 2,500 crore.

India’s foreign exchange reserve rose over $4 billion in the week that ended on May 20, the first increase after declining for ten consecutive weeks as the dollar drifted towards its first monthly loss in five months.

State-owned Gail India will invest Rs. 6,000 crore in the next three years in renewables. The investment can go up by an additional Rs 20,000 crore by 2030, GAIL India chairman and managing director Manoj Jain told reporters.

Spanish inflation soared to 8.5%, denting hopes that the Eurozone’s record price surge is peaking and piling more pressure on the European Central Bank to act.

Brent crude tops $120 a barrel as China eased lockdowns and the EU worked on a plan to ban imports of Russian crude.

Today Nifty forms a Doji and this is dangerous. 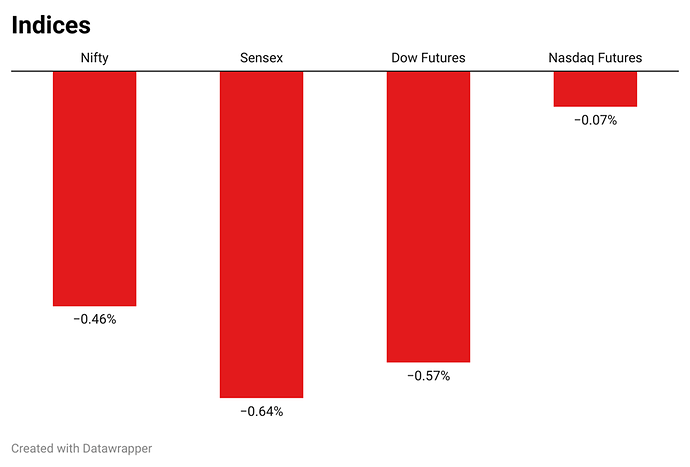 Nifty Realty was the best-performing sector, rising more than 2%, followed by Nifty Media and Metal, gaining more than 1.3% each. While Nifty Energy and PSU Bank indexes were the biggest losers, falling more than 1%. Aarti Industries was the top loser. 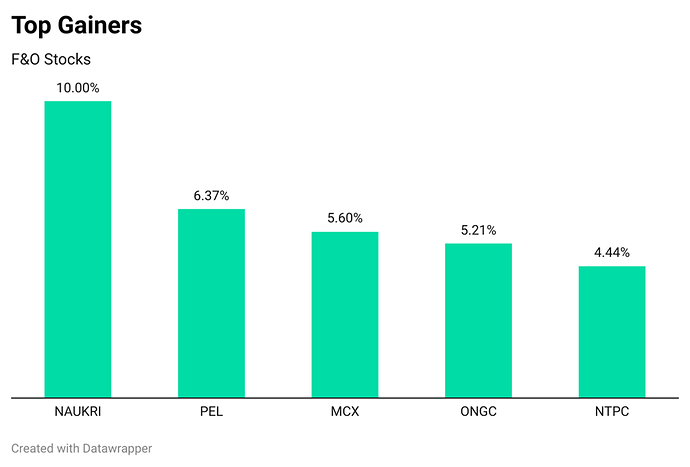 The central government’s fiscal deficit for FY22 has come in at 6.7%, undershooting the revised target by 20 basis points, as per the data released by the CGA.

The Defense Ministry signed a contract worth Rs. 2,971 crores with Bharat Dynamics for the supply of ASTRA MK-I BVR Air to Air Missile and associated equipment for the Indian Air Force & Indian Navy.

Eurozone inflation rose to yet another record high in May. Inflation in the 19 countries sharing the Euro accelerated to 8.1% in May from 7.4% in April, beating expectations for 7.7% as price growth continued to broaden.

China will cut the purchase tax levied on some low-emission passenger vehicles by half, according to a statement on the finance ministry’s website, as Covid outbreaks and lockdowns crush consumer confidence and the government pulls out all stops to spur economic growth.

EU leaders reached a compromise to impose a partial oil embargo on Russia. The watered-down embargo covers only Russian oil brought in by sea, allowing a temporary exemption for imports delivered by pipeline.

Benchmark indices failed to hold gains in a choppy session, falling for the second day in a row. US futures indicate a flat opening for US markets. 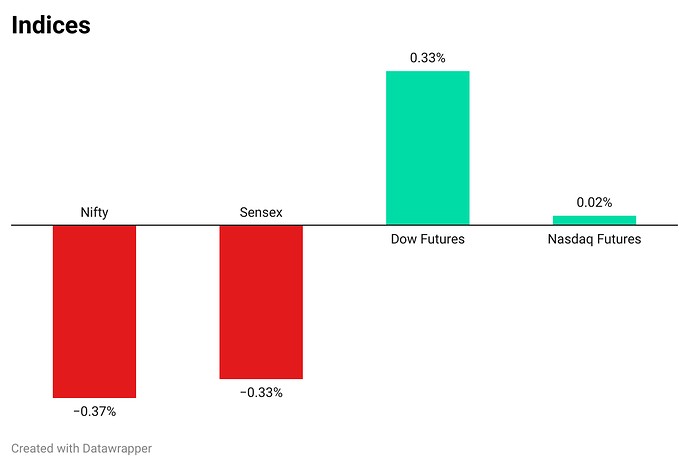 Majority of sectoral indices finished negative. Nifty PSU Bank was the best performing sector, rising 0.7%, while Nifty IT was the worst, falling 1.41%, followed by Nifty Pharma and Realty, both dropping more than 1% each. Syngene International was the top loser. 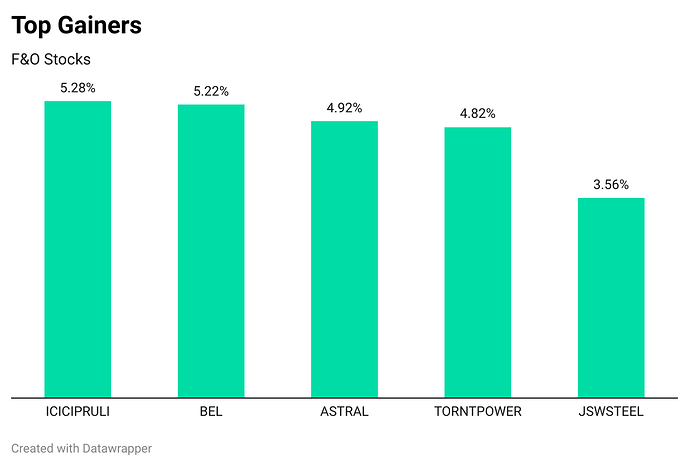 India’s factory activity grew more than predicted, indicating overall demand remained resilient despite high inflation. Manufacturing PMI, compiled by S&P Global, came in at 54.6 in May, lower than April’s 54.7 but above the 50-level separating growth from contraction.

The GST collections for April stood at Rs 1,40,885 crore, according to a statement by the finance ministry. That is an increase of 37.16% over the year earlier but a decline of 15.9% from the previous month.

The demand for FMCG in rural areas slowed down for the third consecutive quarter, with the volume slipping to 5.3% in the January-March period, according to NielsenIQ’s FMCG snapshot for Q1 2022.

Nifty and Sensex recovered from day’s lows to close the session on a positive note. Dow and Nasdaq futures indicate a positive opening for US markets. 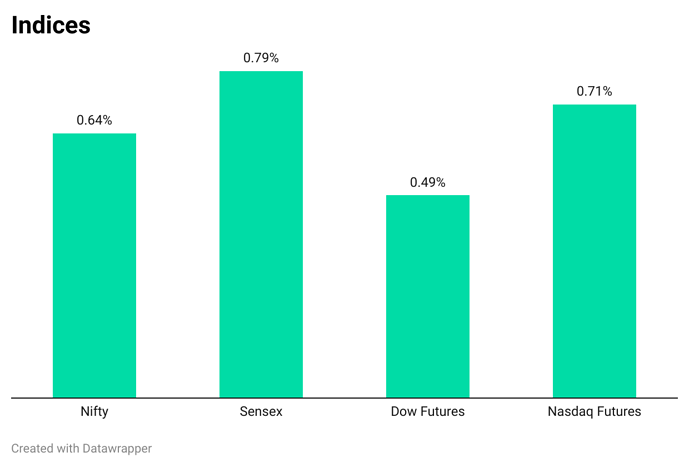 On the sectoral front, all indices except Nifty Auto and Bank ended in green. Nifty Energy index being the top gainer, surging by around 2%, followed by Nifty IT, up 1.82%. Apollo Hospitals was the top loser. 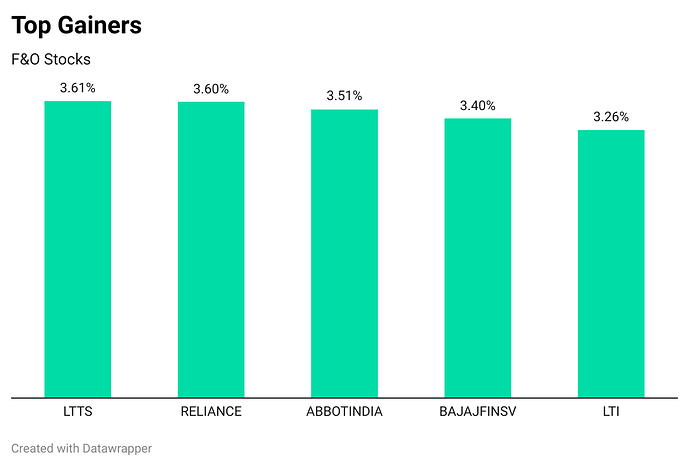 Bank credit to NBFCs grew in double digits in FY22 with outstanding bank credit rising by 10.4% to Rs. 10.5 lakh cr on the back of improvement in overall economic activities and banks renewed focus on the NBFC sector following improvement in their balance sheets, says a report.

Reliance Brands Ltd. and Plastic Legno have signed a joint venture arrangement through which RBL will acquire a 40% stake in Plastic Legno’s toy manufacturing business in India.

The Indian digital payments ecosystem will nearly triple to $10 trillion by 2026 from the current $3 trillion led by growth in merchant payments, according to a joint report by PhonePe and the Boston Consulting Group.

ITC Infotech said it has paid an amount of $33mn to PTC as part of an agreement to acquire a substantial portion of the American company’s product lifecycle management implementation services.

Sheryl Sandberg, the No. 2 executive at Facebook owner Meta, is stepping down. Sandberg has served as chief operating officer at the social media giant for 14 years. She joined Meta from Google in 2008, four years before Facebook went public.

China’s cooling economy is going to be the biggest drag on worldwide smartphone shipments this year, according to the latest IDC forecast, which points to a 3.5% global decline in 2022.

Benchmark indices fell from the days highs to close the session in red. US markets too are staring at negative opening as futures trade lower. 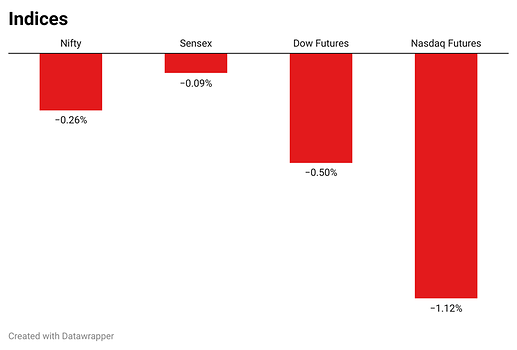 Nifty IT index was the sole gainer today, while all other sectors ended in red. Nifty Auto, Media, Bank and Metals were the top draggers, falling more than 1% each. 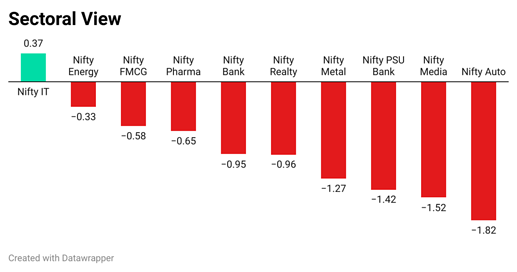 Metropolis Healthcare was the top gainer.

Ramco Cement was the was the top loser. 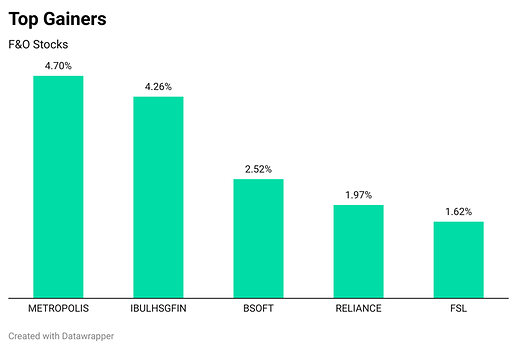 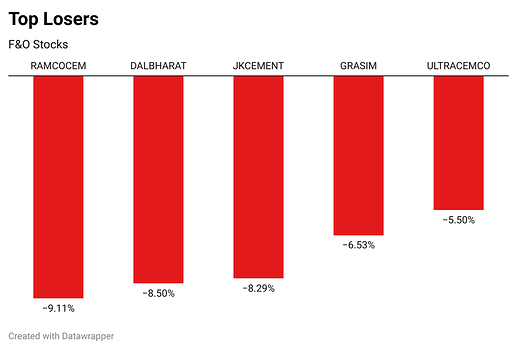 Shares of Deepak Nitrite dipped 4% after the company’s manufacturing facility in the Nandesari GIDC in Gujarat caught a massive fire following five chemical blasts on Thursday. After the accident, the company released a statement saying it was monitoring the situation and that the loss of property was insured.

Activity in India’s services sector improved to its highest level in eleven years. The S&P Global India Purchasing Managers Index for services rose to 58.9 in May from 57.9 in April, making it the best reading since April 2011.

Shares of cement companies were under pressure as they fell after the sector major UltraTech approved a new capital expenditure plan of Rs. 12,886 crore to tide increased competition in the sector.

Turkey’s inflation soared 73% in May, the fastest pace since 1998 as it came under more pressure from the rising cost of food and energy while ultra-loose monetary policy contributed to currency weakness.

World food prices dipped in May for a second consecutive month after hitting a record high in March. The FAO food price index, which tracks the most globally traded food commodities, averaged 157.4 points last month versus 158.3 for April.