What is block deal? Difference between block deal and bulk deal? Interpretation of such deals?

how to get earlier information of block deals for specific stock in nse?

Block deals are prearranged transactions, shares bought and sold at an agreed price and during special time slots on the exchange between the buyer and the seller.

Block deals do not create spikes in price or volume during the trading day.

Bulk deals create spikes in price and volume real time as it happens.

On Block deals, the profile of the new buyer is the deciding factor for attracting medium to long term investors. If the new buyer is someone who can contribute to the growth of the company, it is considered as a positive sign.

On Bulk deals, the deciding factor is the quantity for attracting positional and short term traders.

The bulk buyers would not want the market to know about their buying activity while it happens, and is done strategically to accumulate shares as cheap as possible.

You can regularly check details of such transactions on the following link:

how to get earlier information of block deals for specific stock in nse?

Quoting from Rediff, also explains difference between block and bulk, that most people think is the same.

What is block deal?

According to Securities and Exchange Board of India a block deal is a single transaction of a minimum quantity of five lakh shares or a minimum value of Rs 5 crore and is done between two parties through a separate window of the stock exchange that is open for only 35 minutes in the beginning of the trading hours.

So in a block deal, the buyer and seller already know each other and have agreed on the trade. They come to the exchange and execute the order in this 35 min window.

SEBI has also made it mandatory for the stock brokers to disclose on a daily basis the block deals made through DUS or Data Upload Software.

Unlike a block deal that happens through a separate window that is open for only 35 minutes in the beginning of the trading hours at the stock exchange, bulk deals happen all through the trading day. Another major difference is that a bulk deal is said to have happened if under a single client code and in a single or multiple transactions more than 0.5 per cent of a company’s number of equity shares is traded.

Also, bulk deals are market driven while two parties are required for a block deal to take place. Bulk deals carried out for the day should be revealed by a broker on the same day to the stock exchange using the DUS.

Who can go for these deals?

Generally, only the institutional players including the foreign institutional investors are the major participants in this type of deals. This also includes mutual funds, the various financial institutions, and companies carrying out insurance business, banks, and venture capitalists. Sometimes, many promoters use this window to arrange the issues that are related to cross holdings.

Statutory requirements that must be followed for block deals

SEBI has rules in place certain rules for carrying out block deals. It is mandatory that block deals should happen only through a separate window and for a period of 35 minutes only in the beginning of the trading hours. Also SEBI rules state that block deal orders should be placed for a price not exceeding +1 per cent to -1 per cent of the previous day’s closing or the current market price. Delivery must be made for every trade executed and cannot be squared off or reversed. All details like the name of the scrip, the client’s name, number of shares and traded price should be disclosed to the public through the DUS every day after market hours. 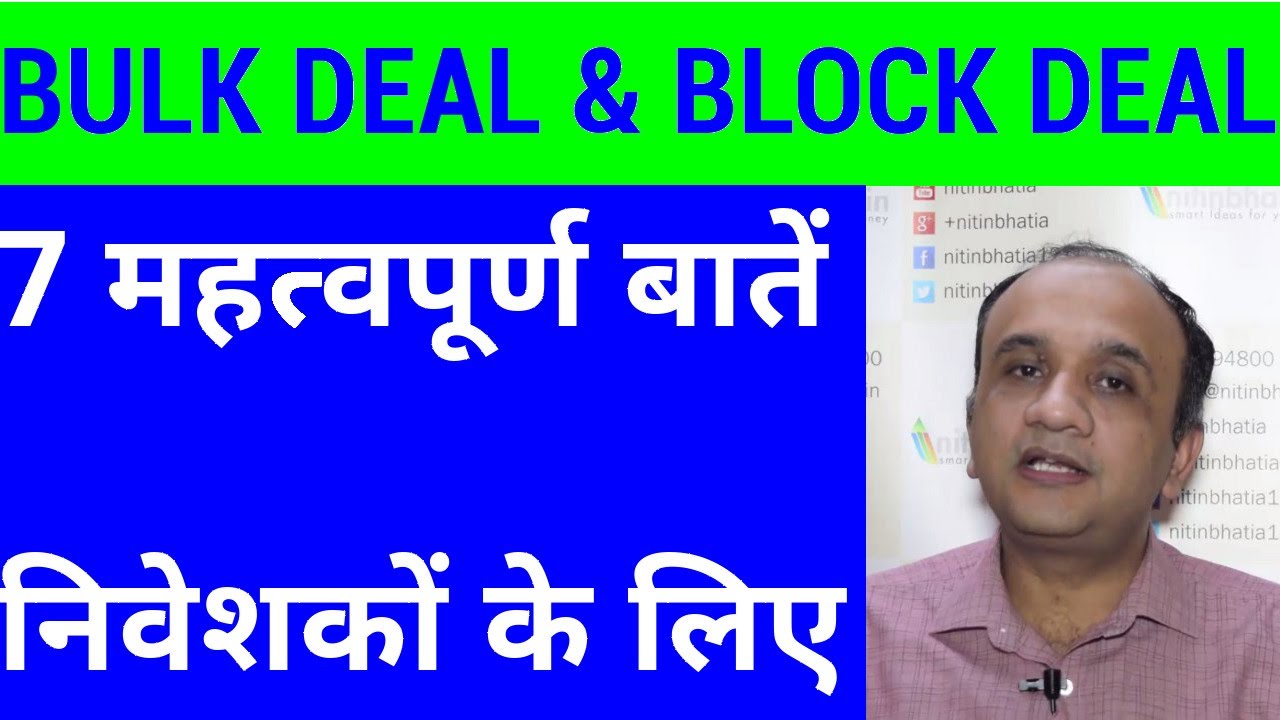 Can retail investors buy stock in block deal ? If they have large amount of capital ?

How all these process works ?

If you have a buyer and seller who have agreed on a trade. It can be done in the block deal window. You will have to meet with stock broker who allow this to happen.

If someone buy more than 0.5 % of company’s number of equity shares in single or multiple transaction and sell it on same day.

Does it consider as bulk order ? Or this apply only if investor take delivery.

Does it consider as bulk order ? Or this apply only if investor take delivery.

Bulk deals don’t result in mandatory delivery (SEBI document (Page 5) makes no mention about such requirement). There is a thread which talks about intraday bulk deals.